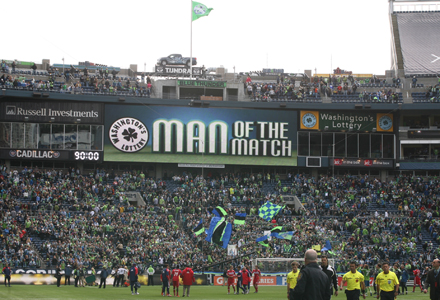 To urge consumers in Washington to play the lottery in social groups, Washington’s Lottery on April 4 launched its Play Together, Win Together campaign that’s leveraging a partnership with the Seattle Sounders to bring its message to life at the team’s soccer matches through October.

The Lottery will tap into the Sounders’ Man of the Match challenge, which asks fans to choose a player before the game at Man of the Match booths in exchange for signed team memorabilia. There are in-stadium contest announcements throughout the game, and if the fan’s player is selected, they can redeem their player card for a lottery ticket at the booths. They can also enter to win a chance to play a match with the Sounders with two of their friends.

“This is a great way to reach a new audience and to get them interacting with the lottery and realizing that it’s not just something that you do sitting at your kitchen table by yourself, but that it’s more fun to involve your family and your friends,” Scott Kinney, director-communications at Washington’s Lottery, who handles the program, told Buzz.