Verizon, Tillamook and Animal Planet Are More Than Meets the Eye - Event Marketer 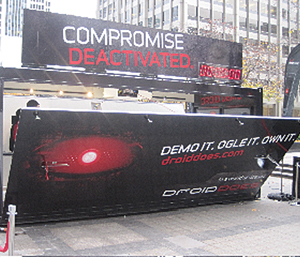 Verizon, Tillamook and Animal Planet Are More Than Meets the Eye

When it comes to taking a new brand to market, sometimes it pays to be mysterious, like Verizon did for its launch of the Droid mobile phone in its shipping container showroom. Other times, a brand’s vehicle needs to show the epitome of brand identity, like Tillamook’s Loaf Love buses that resemble, you guessed it, a loaf of cheese. And sometimes, it’s all about the buzz, like the smart car-turned-piranha-mobiles used for Animal Planet’s “River Monsters” season premiere. No matter what the goal, it might make sense to follow the example of these brands and transform an otherwise stock object into the perfect venue for that next tour. Autobots, roll out:

Verizon
Before the launch of the much-anticipated Droid smartphone at the end of 2009, Verizon dropped industrial-looking, sealed shipping containers in five markets to build buzz and generate excitement. A large exterior clock counted down the days, hours, minutes and seconds until Droid hit the market. The real draw came on release day, however, when the containers suddenly popped open to reveal a Droid showroom, filled with phones by Motorola and HTC for sale and available for testing. The key for Verizon was to keep the mystery and excitement building as long as possible, while reinforcing the industrial image of the Droid brand, which was all accomplished via the unconventional containers (Agency: Marketing Werks, Chicago).

Tillamook
To celebrate its 100th anniversary, Oregon-based Tillamook Cheese shut the dairy farm gates behind it and hit the open road this year on The Loaf Love Tour, set to hit 10 states and 25 cities over 11 months. At the center of the tour is a fleet of Loaf Love Buses: 1967 Volkswagen buses shortened by four feet, lowered by one foot and refurbished as replicas of Tillamook’s baby cheddar cheese loaves.

“We know that if people taste our cheese, especially our cheddar, that they realize that all cheddars are not created equal and that we have the best tasting cheddar,” says John Russell, senior director-marketing at Tillamook. “Then the trick was how do we do it in a special way, because we didn’t just want to do traditional in-store sampling.”

The baby buses make stops at retail chains where they serve as eye candy to lure customers to the experience, which includes the Love Loaf Lounge, a sampling tent where customers can taste the cheese and grab coupons and recipes. Kiosks are available for consumers to sign up for the Tillamook fan club as well as upload consumer photos to enter to win branded merchandise like buttons saying “Loaf Thy Neighbor” and “I Loaf You” (Agency: Henry V, Portland, OR).

Animal Planet
To promote the April 25 second season premiere of “River Monsters,” Animal Planet unleashed five tricked out smart cars made to look like a swimming school of piranhas on the streets of New York City. From April 21 to 24, street teams—five drivers and five “monster anglers”—wearing branded fishing vests intercepted consumers to hand out branded hats, koozies and tune-in cards.

The piranha smart cars were built with 3D details, like protruding aluminum fins and teeth as front bumpers. On the rear, the vehicles sported an LCD TV playing previews of the show on a loop. The street teams visited city hotspots like Columbus Circle, Grand Central Terminal, Penn Station, Times Square and Central Park.
“We felt that the smart cars dressed as piranhas, traveling as a school of fish, would be a good way to draw attention to the return of our hit show, ‘River Monsters,’” says Noha Abdalla, senior marketing director at Animal Planet. “Our objective with the piranha cars stunt was to create buzz around the return of our highest-rated series ever” (Agency: Pierce, Portland, ME).  EM