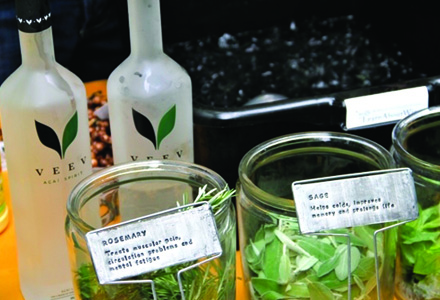 Carter and Courtney Reum are brothers and co-founders of the first carbon neutral spirit brand called VeeV, an alcoholic elixir made from sustainably harvested Açaí. The brothers dreamt up the product in 2003 on a surfing trip to Brazil where they first discovered the now ubiquitous berry. Five years later they left their jobs at Goldman Sachs and headed out to California where they believed their eco-friendly drink and message would resonate with the health and environmentally conscious West Coast mindset. Their mission was to make VeeV equal parts entrepreneurial and socially responsible—a mantra that spills over into its experiential marketing practices today.

These days VeeV is winning industry props, like the Rising Star Award, for being one of the fastest growing spirit brands. But the brothers, who for the first six months in the business flipped a coin daily to see who would go sell VeeV out of the trunk of their car, remain true to live engagements. At food and wine festivals, they set up a unique “Apothecary Bar” to stand out among the rows of spirits brands sampling at these ever-popular events.

“First, as a small brand if you’re not disruptive you’re probably not going to get noticed,” says Carter Reum. “And second, the difficult part for a brand like ours is a lot of people think of VeeV for Açaí or our tagline ‘A better way to drink.’ So we thought, how can we reinforce the other aspect of the brand, which is that we’re a totally socially responsible company? So we came up with the apothecary set up.”

The apothecary bar is also a nod to today’s popular mixologist trend that allows consumers to pick what herbs they want in their drink. The brand uses microherbs by The Chef’s Garden in Ohio, which grows everything from pineapple sage to chocolate mint. The brand hands consumers a recycled mason jar with a base for the cocktail, like agave nectar lime and VeeV, for example. Then consumers choose any berry or herb on display. In line with the theme, they have signage that resembles an authentic apothecary that educates folks on the medicinal properties of each herb. The mason jar functions both as a shaker with the top on, a drinking glass and a branded gift.

Reum says it’s one of those sticky items that people post about on their Facebook page. It’s also a buzz creator at events as people walk around with the jars sharing VeeV’s message. “We’re always trying to give our consumers tools to share our story,” Carter Reum says. They also give them VeeV Sustainability bracelets made from Açaí seeds (celebs wear them, too) that have been “up-cycled” to raise awareness about rainforest preservation.

The company stays carbon neutral by offsetting its business activities through Terrapass and for every bottle of VeeV it sells, it donates $1 to rainforest preservation. Its bottles are made from partially recycled glass, printed with organic soy inks and packaged in boxes made from post-consumer waste. The spirit is produced in Rigby, Idaho, which is the only distillery in the U.S. to use wind-powered renewable energy. And, the eco-friendly Prius is the brothers’ vehicle of choice.

This summer Courtney Reum set out on a summer tour in a wrapped Prius to visit 100 Ruby Tuesday restaurants in 10 days. The partnership with Ruby Tuesday is part of the brand’s efforts to connect with the mainstream market. The tour supported the five VeeV cocktails that the restaurant chain features on its cocktail menu. At each Ruby Tuesday, Courtney Reum educated wait staff about the cocktails. Leading up to the tour, he promoted it on Facebook and Twitter. During the program he engaged followers by posting photos of himself in front of different landmarks, and then tasked folks with guessing where he was. Winners received VeeV merchandise. He visited Alabama, Georgia and North and South Carolina, covering 3,500 miles. The conversation took off on Twitter as well, with retweets requesting that he visit specific restaurants.

“It took us about two weeks to conceptualize and plan the tour and it cost us a few thousand dollars to wrap the Prius, which was great because it doesn’t waste a whole lot in terms of gas. But in return we got millions of impressions from press and social media,” says Carter Reum. “As a small brand like ours there’s no substitute to doing it ourselves.”

Over the course of the 10-day tour, Courtney Reum touched about 2,000 to 3,000 Ruby Tuesday servers, who are now equipped to help share VeeV’s story, too. EM