Uber and PayPal Give Startups a Lift - Event Marketer 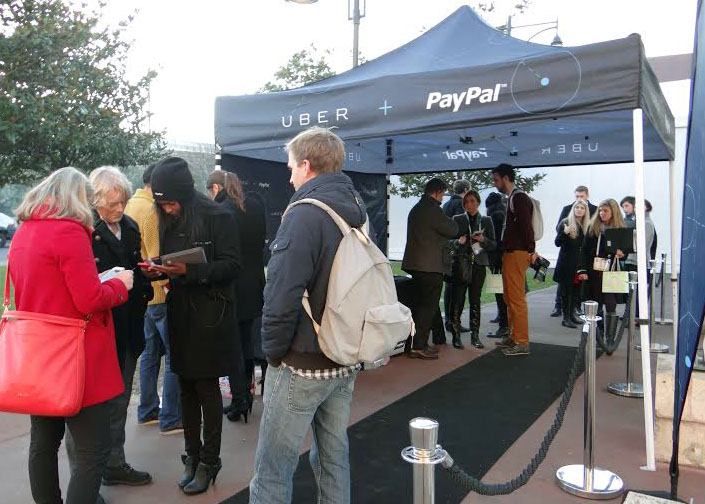 Uber and PayPal Give Startups a Lift

Forget the “Shark Tank”—try a Mercedes-Benz Sprinter van. That’s where, thanks to app-driven ride service Uber and its partner PayPal, more than a dozen aspiring entrepreneurs had the opportunity to pitch their ideas to featured keynoters at the international LeWeb Paris conference Dec. 10 to 12. The campaign, Pitch In Style, was designed to promote the brands’ new partnership and help Uber generate new users in the market.

One week before LeWeb (where Uber happened to have launched five years ago), the two brands invited attendees through their blogs to download the Uber app, activate PayPal and apply through the app’s Promotions section for the chance to schedule a one-on-one networking chat with a keynote speaker. Speakers are often in high-demand and the only time attendees can catch them for a coveted quick piece of personal insight is when he or she is about to get in the car and leave for the day.

Uber and PayPal vetted submissions and selected 18 startups for the program, which took place from 9 a.m. to 6 p.m. on the conference’s opening day. The chosen participants each received a scheduled 15-minute time slot (or more, depending on how the conversation went) to speak with a successful businessperson in the luxury vehicles—sans entourages. The three Mercedes vehicles in use for the day departed from a valet-style activation tent for an established route outside the venue.

The campaign marked a major international marketing promotional push for Uber, which entered 49 new markets in 2013. Other app-driven marketing efforts this year included an “Ice Cream On-Demand” program in 33 cities worldwide in July, and “I Can Haz Uberkittens” in New York City, San Francisco and Seattle in October.

“In the U.S. the market is more mature and people are more aware of Uber; it’s not necessarily the case across the Atlantic, so for us to partner with a brand like PayPal, the exposure was great,” Susanne Stulemijer, director-communications and policy at Uber for the Europe, East Africa and India markets, told Buzz. “We’re also growing at an incredible pace and have a need for talent, so this was another way for us to reach out, through this PayPal partnership, at LeWeb.” Agency: Factory 360, New York City.