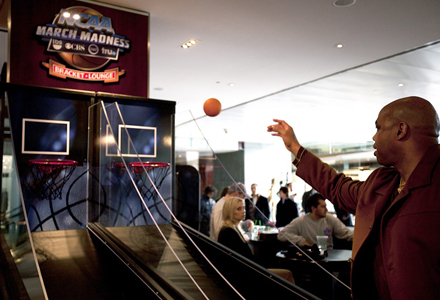 There were many changes to the March Madness program this year: Expansion to 68 teams, starting on a Tuesday instead of the traditional Thursday and broadcasting every tournament game across several networks, breaking the CBS network’s nearly 30-year run as exclusive broadcaster of the games. To promote its new involvement and to help fans get a handle on the shortened timeframe for filling out tourney brackets, the Turner Sports network launched the Bracket Lounge in New York City’s Time Warner Center on March 14, dubbing the occasion National Bracket Day. The lounge is about 2,000 square feet and will remain open until March 25, when it will move into Bracket Town in Houston for the Final Four.

Inside the lounge, several thousand fans each day will be able to watch tournament games on four large flat-screens, or via eight computer kiosks and mounted iPads, which are also loaded with tourney info and bracket-making tips and aids. For fun, fans can take a turn on one of the four pop-a-shot stations to shoot some mini-hoops, pose for a souvenir green-screen photo or get behind a mock sports desk for a chance to shoot a short video of themselves doing commentary on past NCAA games. After the filming and photo, fans get the snapshots and videos emailed to them. To kick off the campaign, Turner deployed street teams in 11 cities and college campuses all over the U.S. to hand out bracket forms and spread the messaging about the new coverage and schedule.

“We were looking for a vehicle to celebrate March Madness and amplify the national conversation,” Christina Miller, svp-sports strategy, marketing and programming at Turner Broadcasting, told Buzz. “We [tried] to create a compelling, iconic space in a top media market and this was a good way to celebrate the first-ever Bracket Day.” Agency: Gigunda Group,  Manchester, NH.