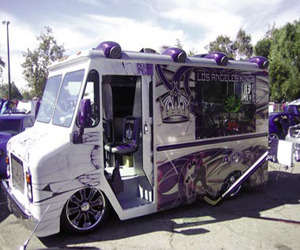 Most people remember with nostalgia the tinny strains of “Pop! Goes the Weasel” floating through their childhood streets and running around the corner with their friends like rats out of Hamlin toward that iconic symbol of neighborhood friendliness: the ice cream truck. Now, smart marketers at companies large and small are looking to tap into that feeling of trust and sweet, gooey love by branding, repurposing and rolling out trademarked tasty treats all over the country. Food and ice cream trucks, often called Treat Trucks, are so prevalent in New York City and Los Angeles (they serve everything from schnitzels to cupcakes), you can hardly take a walk without stepping in the sprinkles. EM takes you down the rocky road with three scoops of the best the marketing world has to offer.

LA KINGS
Since October, Angelinos have been able to grab a free cone and learn more about their hometown hockey team at a fully branded, interactive LA Kings ice cream truck, which has been hitting the streets at local fairs and events all season. The mobile initiative is designed to drive ticket sales and build excitement around the team and its sport.
The truck is equipped with several flat-panel televisions that feature highlight reels and video games. It includes on-site ticket sales capabilities and a green-screen photo activation studio that puts consumers on the ice as a Kings team player. The vehicle also is making appearances at high-profile events and gathering spots throughout the region, including local hockey leagues and sports bars.
“We expect to gather new sales leads and marketing opportunities, thanks to the vehicle,” says Jonathan Lowe, senior director-marketing and promotions at the LA Kings. “We are constantly seeking new and creative ways to reach out directly to our fans and to communicate the LA Kings experience with them. Thanks to this promotion, we will be able to energize our fan base and create new fans while at the same time creating new channels of communication where we can share our latest news, ticket offers and giveaways” (Grand Central Marketing, Los Angeles, handled; Build: A&G Custom Sound and Auto Accessories, Los Angeles).

UMPQUA BANK
In a direct appeal to consumer taste buds, last July Oregon-based Umpqua Bank turned an everyday van into a modern-day ice cream truck to help drum up some buzz as it expanded into the California market. Instead of prerecorded plinkety-plink favorites, Umpqua hired live musicians to entice the crowds. The company sent the ice cream truck into each market before the changeover of each branch (the expansion was part of a takeover of another bank), handing out free cones and goodwill in equally liberal amounts.
The “handshake marketing” approach, as it is known internally, has been so successful that the bank now has two of the vehicles on the road, one for the northern markets and one for California exclusively.
“It’s a friendly hello to our new customers and a great way to get new associates excited about the changeover and familiar with our culture as a company,” says Eric Lucero, vp-marketing strategies at Umpqua Bank. “It’s really about who we are and who we want to be: a neighbor” (Design: Leopold Ketel and Partners, Portland, Oregon).

JCPENNEY
In a departure from the icy treats genre but with goodies just as sweet, JCPenney for four days in October last year hit the streets of New York City with a mobile ice cream truck filled with goodies and samples of its Olsenboye collection, a new line of junior apparel designed by Mary Kate and Ashley Olsen for sale at its stores this spring. The name, Olsenboye, derives from the twins’ Norwegian ancestry. The full Olsenboye launch is slated for this month.
Passersby in high-traffic areas such as Herald Square, Union Square, Washington Square and SoHo could purchase preview pieces of the collection such as basic t-shirts, hoodies and flannels while brand ambassadors distributed silver branded balloons and cupcakes. They could also have their pictures taken against a photo backdrop, which they could locate later on the retailer’s Facebook page.
“This allowed us to start the buzz in our fashion capitol and seed our product to influencers and was a critical component in our 50-store preview,” Merianne Roth, brand publicity director at JCPenney, says. “Mary Kate and Ashley came to the table with the idea. They felt it was compelling and gave them a platform to talk about the brand” (Agency: MKG Productions, New York City). EM