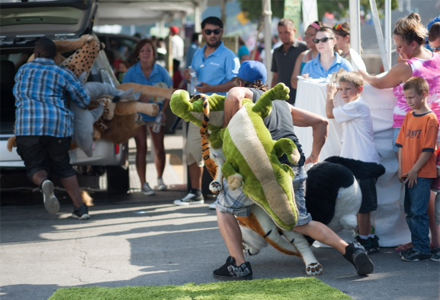 Toyota this summer has launched an expanded version of last year’s Prius v Creation Station campaign to include a wider selection of its family-targeted vehicles such as the 2013 Avalon, the Highlander, Landcruiser, Yaris and more. The tour launched July 4 at Fair Saint Louis and through December will travel to lifestyle destinations that align with current and prospective Toyota drivers such as Taste of Dallas, Jazz Aspen Snowmass, Brooklyn’s Dumbo Arts Festival and Artscape in Baltimore.

Creation Station offers attendees the chance to explore and interact with the Toyota line-up in a fun and casual environment outside of the showroom. The Toyota Cargo Challenge showcases the expansive cargo room of the Prius v, which is 58% larger than the third generation Prius. Teams of up to four people work together to pack the cargo space the quickest for a chance to win prizes. At arts and crafts stations, kids can color tote bags, create spin art card and make Shriny Dinks. Families can snap a picture in the Toyota Photo booth and take home a lenticular 3D photo as a souvenir. Attendees also win prizes via an on-site dice game.

“Based on the success of 2011’s Prius v Creation Station program, we have expanded this year’s tour to feature a wider range of Toyota’s family friendly lineup of vehicles for our customers to easily explore which best fits with their lifestyle,” Sona Iliffe-Moon, PR manager, Toyota brand and marketing communications, told Buzz. Agency: Filter Creative Group, Los Angeles.