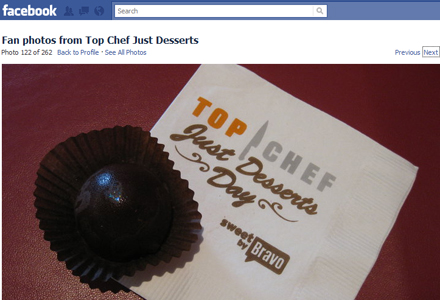 How Brands Are Tracking Consumer Sentiment With Social Media

When social media first came on the scene, many event marketers jumped in with both feet to leverage its ability to make connections and keep in touch with consumers and clients they only saw a few times a year at events. Since then, social media websites like Facebook and Twitter have evolved from basic community-building platforms into powerful measurement tools that not only generate customer data, but track more qualitative variables like consumer sentiment and interest.

In September, the Bravo network used Facebook and Twitter to promote its third incarnation of its “Top Chef” series, “Top Chef Just Desserts.” The network put branded gourmet dessert trucks on the streets of Chicago, Los Angeles and New York City, and used Facebook and Twitter to disclose each location minutes before arriving at each stop where it handed out decadent treats to passersby (Grand Central Marketing, New York City, handled).

“Eighty percent of our viewers are on smartphones and more likely than viewers of any other major cable network to have both a Twitter and Facebook profile,” says Valerie Brown, director-consumer marketing at Bravo. “With these insights we knew that we could take an innovative social media stunt to our viewers and drive national awareness.”

Brown and her team spend a great deal of time managing Twitter and Facebook, listening and responding with the hope of creating a deeper engagement with each consumer. Thanks to her efforts, the network saw a seven percent increase in “likes” on the “Top Chef Just Desserts” Facebook page in one day, and 3.7 million impressions via related Twitter posts.

Boston-based social media trainer and consultant Patrick O’Malley, says the search.twitter.com search function is where the real magic is, because you can see what anybody, anywhere is saying about your brand. Still, he favors Facebook because of its more active and meaningful community. The downside is that unless you’re a “friend” on someone’s Facebook page you can’t monitor a consumer’s status updates. O’Malley predicts that in the future tweets are going to be categorized, similar to a newspaper section, so that users can just ask for the best tweets in those categories. Until then, O’Malley suggests marketers consider a product like Radian6, one of the most complete platform monitoring tools that enables marketers to listen, measure and engage in social media activity.

Robert Hodgson, president of Boston-based consultancy Predictive Marketing, suggests using the Facebook Insights metric tool, which provides demographic information, including gender, age and geography, as well as information about how a consumer’s fan activity (i.e. their interest in becoming a fan of a product or brand’s Facebook page) is building or changing over time. The tool can show you whether they’re terminating their fan status or befriending new brands. Hodgson agrees that Facebook’s closed community can be a challenge, yet there’s nowhere else really to get that kind of meaningful information.

“Facebook is walking a fine line between protecting the privacy of its users and being useful to businesses,” he says. “It doesn’t make it very easy to get a handle on who all your followers are. You can’t export much information to come back and analyze later. As that becomes available we’ll be able to get more analysis on Facebook.”

Hodgson points out a similar problem with Twitter, which despite being more in the public domain, doesn’t allow you to retrieve tweets that are more than one or two weeks old. But he sees signs of that changing. For example, Google’s announcement that it will start archiving tweets that can be searched over time is a step in that direction.

Measuring consumer sentiment online has become so important that Irvington, NY-based House Party based its entire business model on it. The company throws brand-sponsored house parties and then the host and attendees post photos and blog posts about it on an event-specific website as well as other social media outlets. The House Party team uses a mix of proprietary tools as well as purchased ones to measure consumer sentiment.

Each one of House Party’s events gets a unique hashtag that allows them to quickly identify and isolate brand- and party-related conversations. The team uses an internal text-mining tool that allows them to take the Twitter feed and pass it through a filter to gather more reliable sentiment than what is available via general search tools.

“We’re tuning the language that’s specific to us and not constantly trying to teach the tool to learn as we go, so it saves us a lot of time and effort upfront,” says Michael Perry, chief product officer at House Party.

Perry supplements this process with a moderately priced tool called Scout Labs, which comes in especially handy when measuring sentiment on blogs. “We don’t normally use our internal tool on external blogs, because they’re not easy to code like Facebook and Twitter that have a standard platform,” explains Perry.

“Because you can customize and create your own template, there are so many different blog platforms that it would require a specific tool to be built for each. Scout Labs starts to see what that blog conversation looks like and allows us to quickly understand where reoccurring conversations are happening.”

While the more sophisticated monitoring and measurement tools are still in their infancy, one thing is for certain: the conversations about your brand are out there. Time to tap in and listen.