Time is of the Essence – Event Marketer 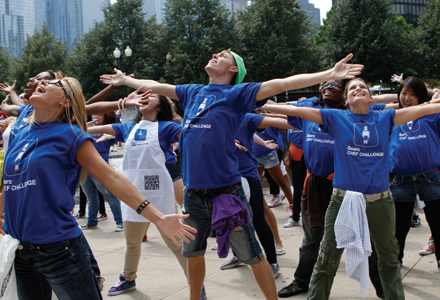 Time is of the Essence

Event marketers are known for their ability to take an idea from concept to execution quickly. However, even they agree the turnaround times are getting tighter as program time frames continue to shrink. Are shaky budgets delaying sign-off on program costs? Is technology fueling the last-minute frenzy? Or, is it just the new speed of business?

When Mentos tasked Minneapolis-based Innova Marketing with generating content for its Facebook page that would give consumers a reason to visit it, the agency set loose a street team on the streets of Minneapolis for four weeks this summer. Dubbed the Mentos Instigators or Mentos Super Fans (depending on the event), the team of four ambassadors wore branded t-shirts or, when acting as Super Fans, superhero costumes, while visiting local hotspots like Minnesota Twins baseball games. The stunt was part of a series of events Mentos executed to pique the interest of consumers during a test campaign for a national program. Innova had to execute the ideas, in some cases, in mere hours.

“We live in the ‘hurry up now’ world,” says Brad Pappas, ceo at Innova. Case in point: when Innova was casting field managers for Mentos it put together a test that required candidates to hit the streets with their smartphones, pull a story together in 45 minutes, edit a video in 45 minutes and get the whole package up on YouTube in an hour and a half. “It was stunning how fast they could do things,” Pappas says.

At the Twins games, the Mentos Super Fans recruited an additional 25 consumers off the streets or on Facebook to be their Sidekicks and also wear Mentos superhero costumes while sitting in the stands, cheering and passing out samples. Though samples were always available, the objective was more than sampling; it was infiltrating people’s lives to make Mentos a part of their day. The Instigators, for example, bought consumers lunch or asked fun trivia questions for a chance to win branded t-shirts. The experiences were all captured on video, which were uploaded onto Facebook on the spot.

But it’s not just the speed of consumer engagement and viral marketing that’s compressing the timelines. Craig Cuchra, Mentos’ brand manager, explains that it’s about budgets, too. “A lot of it had to do with budgeting. We executed these events in late June and July and we start our budgeting process July and August for the following year, so we wanted to see what is working and what isn’t,” he says. “It’s about how quickly we can fail fast and fail cheap, how quickly we can execute a lot of things and then apply that learning either quickly thereafter or at a later time.”

Chicago-based Event Architects this summer pulled off a flash mob dance routine in the middle of Chicago’s Navy Pier with just three weeks to plan and execute. On July 31, a crowd of 20 professional drummers, 10 dancers and 200 trained volunteers took over Gateway Park in a dance routine that incorporated Sears kitchenware like pots, pans and spatulas into the choreography. The dancers tore off their shirts and jackets to reveal branded blue t-shirts with a QR code on the back, which consumers scanned with their phones for more information on the Sears Chef Challenge event taking place that evening. Before the brand could get the video up, passersby were already shooting their own videos and photos with their cell phones. An edited version of the flash mob aired on 1,000 websites during a three-week ad buy.

Generally, a stunt like this would have taken at least two months to coordinate. The now-famous T-Mobile flash mob dance routine inside the Liverpool Train Station in England took about four months to organize. But the Sears program went off without a hitch, despite the tight turnaround. The team at Event Architects suspects the culprit for the shrinking turnarounds might be the recession.

“We think part of it has to do with the economy,” says Emily Olson, senior account executive at Event Architects. “I think brands are waiting to see if they’ll have the budget for a program and when they can’t wait any longer, they want it to happen and happen now.”

Shawn Pauli, vp-appliance builder distributor, home appliance operations at Sears, agrees that “it is quite unusual to be able to pull off a 200-person flash mob in such a short amount of time.” However, he says, in Sears’ case there wasn’t a budget issue and nobody was pressuring him to do it, it just made sense to get it done in time for the show in Chicago that night. “I have a large sense of urgency to get things done when we come up with a great idea like the flash mob.”

Have you seen your timelines shrinking, too? Do you have a hunch about what’s going on? Share your thoughts in the comments section below.  EM