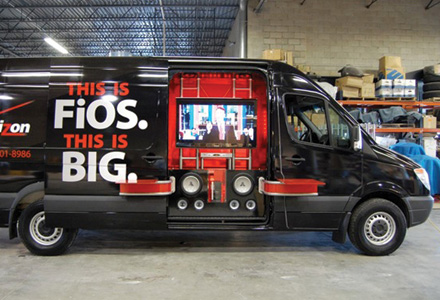 Then and Now: Mobile Tours

In our Then and Now series, EM revisits old event marketing trends to find out where they’ve gone since we first reported on them. Are they old hats and has-beens? Or is that past up-and-comer a future best practice that’s now an industry standard? In this rolling installment, we re-examine some of 2007’s most popular rigs, which we covered in our February issue.

Mobile tours were one of the earliest forms of event marketing, and have since become one of the best deliverables of ROI for brands, both in consumer and b-to-b markets. In 2007, the economy was flush with cash and running like the bulls in the streets of Pamplona.

Consequently, big vehicles were in vogue when it came to carrying brand messaging across the country. As the bear drove off the bulls a few years later, new spending was off the menu, and many of those “bigger is better” tours found themselves parked indefinitely.

And now? EM asked some of the best and brightest builders what they are making for their brand and agency clients and where they see the marketplace going. But first, let’s take a look back.

What We Said Then:
EM surveyed the marketplace for the hottest tours running and boiled it down to a top four of mobile vehicles: the RV, Airstream, 53-foot double-expandable 18-wheeler and 38-foot gooseneck.

“With several types of trucks to choose from—and plenty of customization options—it can be difficult to pick the vehicle that best fits your campaign,” we said.

We called the RV the best option for programs that call for “quickly zipping in and out” of event activations. The Airstream was the coolest thing on the road, with its retro look and classic Americana status. For the go-big or don’t go crowd, the double expandable was the only show in town with its huge footprint and versatility. For a brand with a heavy load and lots of gear, but not much need for indoor activation space, the gooseneck was the go-to choice.
If you saw a branded marketing vehicle on the road that year, the chances were good it was one of those four. But that’s not quite true anymore.

What We Know Now:
Well, the event marketing industry seems to be coming out of the woods and reinvesting, and the mobile sector is no different. But the brands that are investing in new vehicles are doing so in a much more strategic and streamlined way.

All of our experts agreed on two things: the Airstream is out of favor and the mid-sized van is in. Clients want flexibility and maneuverability, and the Sprinter or Transit van is a perfect choice for that. “They’re easy to customize inside and out and great for a small footprint event,” says Greg Peterson, president of New Berlin, WI-based CGS Premier.

Joe Doyon, co-owner of Worcester, MA-based Turtle Transit, says mid-sized vans are desirable because of the low price point and the fact that “brands can use the slide-out doors and multiple access points for flexible displays and custom solutions.”

The bigger rigs are still hitting the highways, of course, and Larry Borden, owner of Aardvark Event Logistics says the economic environment forced builders and brands to be creative. “All options are on the table. It used to be bigger equals better,” he says. “Now it’s all about flexibility and the range of events a vehicle can do.”

Brands still like the RVs and trailers, but are seeking more cost-effective solutions, too. Because of that, many are leasing or renting large vehicles instead of buying. The overhead is lower, and so is the liability. An attractive combo, says Borden.

There are some new options out there today that weren’t even on the heavy hitters’ radar screens in 2007. Doyon says the kitchen, or food truck trend is only growing and gathering steam. “It’s not just sampling and cooking going on,” he says. “Brands are using the food and the novelty to promote a product. That’s the value.”

Borden called out the glass truck trend as another up-and-comer. “They look great and attract attention,” he says, “but there is a massive difference in price from a standard box truck.” The glass option can be more than twice as much, he says, so consider tapping into this trend carefully.

In short, the past five years have seen the Airstram fall out of favor and the smaller vans and box trucks come in, while the big rollers are still out there, if in smaller, more nimble fleets. We say, keep that rubber on the road and we’ll catch up with you at your next stop.