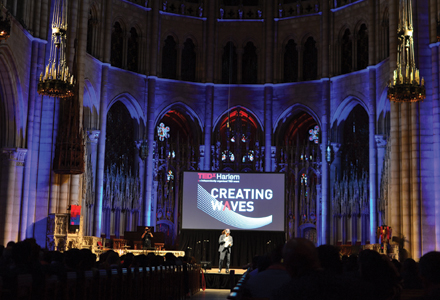 It was only fitting that TEDx would make its way to Harlem, a community in upper Manhattan that has a rich history of ideas and innovation that started in the 1920s with the Harlem Renaissance. During that period, Harlem’s community became a hotbed for theater, literature, art and music that has since become an indelible part of America’s cultural identity. And today, Harlem is seeing a rebirth once again with the renovation of entire blocks of multi-million-dollar brownstones and the constant presence of former President Bill Clinton whose William J. Clinton Foundation operates just a few blocks from the iconic Apollo Theater.

On March 27, TEDxHarlem brought together Harlem’s past, present and made a promise for its future at the neighborhood’s iconic Riverside Church–the same place where Dr. Martin Luther King Jr. in 1967 delivered his famous anti-war speech. Fittingly, “Create Waves” was the theme of the event. It spoke to the notion that ideas have the ability to spread and make an impact, no matter where they are conceived. That message inspired more than 700 attendees to come out to the event, including Brodie Enoch, a public transit rider campaign manager at Transportation Alternatives. “I feel like a kid in a candy shop,” he said. “I’m hoping to connect with other people, not just telling them what I’m working on but listening to what other people are doing.” And there was plenty to listen to.

The theme was embodied in each of the 20 speakers that took to the stage that day to talk about subjects that spanned mobility and connectivity, health and wellness, technology, science and engineering, art and math, built environments and civic engagement. There were also remarkable performers and a variety of videos shared with the audience, which included local business owners, leaders, school children and the community at large. EM associate editor Sonia Andresson-Nolasco takes us inside Riverside Church to bring you more of her day at TEDxHarlem.

The Setup
Originally, TEDxHarlem had been scheduled for the Apollo Theater, but the organizers moved it to Riverside Church. They emailed registered attendees with the change of venue and posted it on tedxharlem.com, explaining that the new venue would allow them to offer a reduced general admission of $20 (at the Apollo it was $100). It was a good move as there were many folks coming in off the street and buying their tickets on-site. Just through the main doors, there was a cafeteria stocked with light snacks and water, and tables where attendees could pick up tickets, grab a downloadable app and pick up press information. Public relations agency Edelman, an event sponsor, had staff on-hand to answer questions and help guide attendees throughout the day.

The church also offered a multi-level space and good proximity to other nearby venues that allowed TEDxHarlem to offer experiences beyond the stage. For example, Syracuse University held its WIGIT conference a few floors above the main stage. During the lunch break, there was an Innovation Playground pop-up organized by the Rockwell Group, speaker Kevin Carroll of Active Play and NBA Cares in Secura Park, a block up from the church. Children at the event got to hang out and do exercises with NBA player Felipe Lopez, which tied to A Partnership for a Healthier America’s Play Streets initiative. There were also informal luncheons where attendees could chat with the speakers. Those who couldn’t attend could watch the event streamed live on livestream.com/tedx or visit the event’s Facebook page. On-site, attendees were encouraged to tweet using the hashtag #TEDxHarlem.

The Content
The programming started off with an introduction by Marcus Glover, TEDxHarlem organizer, who made everyone in the audience stand up and greet the person next to them. Then, in the tradition in the African-American community of asking an elder before you speak, he asked his grandmother in the audience if he could speak. He then took attendees on a brief journey through the Harlem Renaissance explaining that TEDxHarlem had as its goal to make the day a transformational moment that will drive ideas and change well into the future.

Glover then introduced Majora Carter, radio personality and environmentalist, and the host of the first of four “Movements” scheduled for the day: Global Future, The Application of Ideas, Innovation and Triumph and Actionable Moments. Carter talked about how gentrification is often perceived as a negative for deeply-rooted cultural communities like Harlem, but that it’s like the wind—if you harness it, it can be a force for good. With that, Carter set the stage for the rest of the day. She introduced the speakers in her group, which included BINA-48, the world’s most advanced social robots, and Bruce Duncan, managing director of the Terasem Movement Foundation Inc. and project leader for the LifeNaut Project.

Movement Two was hosted by Carlos Dominguez, svp at Cisco and included talks by Scott Belsky, ceo at Behance Network, a leading online platform for creative professionals, as well as a performance by Kris Bowers, the 22-year-old winner of the 2011 Thelonious Monk International Jazz Piano Competition Award. The host of Movement Three was Coltrane Curtis, owner, founder and creative director of Team Epiphany, and a former MTV VJ. There were many excellent speakers and performers in this movement, which ranged from a talk by student Ana Henriquez, a Mexican immigrant detailing how she was smuggled into the U.S. at five years of age and her current fight for citizenship, to an exciting singing and saxophone performance.

Movement Four was hosted by best-selling author and nationally syndicated advice columnist Harriette Cole. She wrapped up the programming with more inspirational talks, including Dr. Alim Muhammad who called Harlem a “food desert” and urged people to create “hoop houses” atop their buildings to grow fresh produce and fruits. There were performances by the cast of the off Broadway hit, “Mama I Want to Sing.” The big finale was a performance by Ghana-based singer and his band Blitz The Ambassador, which got everyone on their feet. We swayed our hips to the mixed sounds of Hip-Hop, Soul and African beats. In Harlem, it couldn’t have concluded any other way.

The Overall Experience
To say I was inspired couldn’t begin to capture the emotion that TEDxHarlem generated for its audience (or, at least for me) that day. What it will mean for the community, only time will tell. But the formula that TEDx brought to its first Harlem event offered not only motivational speakers and excellent entertainment, it mixed in speakers who offered resources and ideas for initiating change in the local community.

Like Robin Chase, co-founder and former ceo at Zipcar and GoLoco (the first company to combine ridesharing, social networks, and easy payment), who put her money where her mouth is. The next stop for her businesses? Harlem. Then there was Jake Barton, founder and principal of Local Projects, an award-winning media design firm for museums and public spaces, who has done wonders for Detroit and had ideas about how to do the same in Harlem. And there were those that have been doing the hard work in the community for years, like Thelma Golden, director and chief curator at The Studio Museum in Harlem. Or Chef Marcus Samuelsson, who opened The Red Rooster in  2010, which not only celebrates the roots of American cuisine but provides jobs. And there’s no greater responsibility than creating the leaders of tomorrow. Like Seth Andrew, superintendent at Democracy Prep Public Schools, a network of “no-excuses schools” in Harlem.

Most events and their keynote speakers are great at delivering inspirational messages. TEDxHarlem turned those messages into actionable ideas. If the energy can be sustained, and I hope it can, I say, get ready for another Harlem Renaissance.