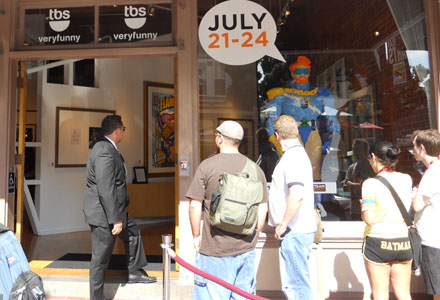 TBS leveraged its relationship with late-night talk show host Conan O’Brien and his active fan base by creating a pop-up experience during Comic-Con that featured artwork created by O’Brien’s fans. Housed in an art gallery from July 21-24 near the San Diego Convention Center, the pop-up was a physical extension of the fan-driven website Coco MoCa: The Museum of Conan Art. The collection featured 60 pieces created by Conan fans, including illustrations, oil paintings, pencil drawings and more. The exhibit also helped promote “The Flaming C,” Conan O’Brien’s animated superhero alter ego and series created in conjunction with Warner Bros. The trailer was unveiled at Comic-Con to fans.

“When Conan came to TBS we understood that he has a tremendous passionate fan base and we have taken a very fan-forward strategy with everything we have done with Conan,” Tricia Melton, svp-marketing at TBS, TNT, Turner Classic Movies, told Buzz. “The fan art concept is something that Team Coco had developed online and we wanted to bring it to life, and marry it a bit to the notion of ‘The Flaming C’ trailer that got a lot of press at Comic-Con.”
The pop-up also included a green-screen photo op that gave fans a chance to don props, like superhero capes, pose next to “The Flaming C” and then share the image online. There was also a paint-by-numbers collective art piece that each visitor could contribute to. Attendees also walked away with a limited-edition poster of “The Flaming C” and other branded items. Fans that checked-in via foursquare received a limited edition Conan pin and were registered for a chance to win a trip for two to Los Angeles to see a taping of “Conan.” To top it off, O’Brien surprised fans with a visit to the pop-up while at Comic-Con for panel discussions. Six thousand people stopped by over four days. Agencies: Bottlerocket Marketing Group, New York City; Omelet, Los Angeles.
2 ARTICLES LEFT!
Subscribe Today and Get Unlimited Use of the World’s Largest Content Resource on Experiential Marketing