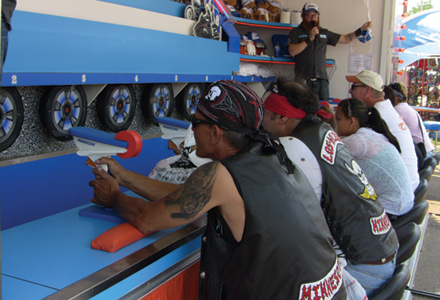 Beer and Branding in Sturgis, SD

In the first 10 minutes on the high street in Sturgis, SD, for the 72nd Annual Sturgis Motorcycle Rally Aug. 6 to 12, I met a man from Ohio, who had ridden across more than 1,000 miles to be there. We strolled together into the Loud American Roadhouse, ordered a whisky for him and a beer for me, and we talked for a while. He was in his late 30s, divorced and fairly new to motorcycling. He got his first bike about 10 years ago, he said. It turned out that he’d recently sold a profitable carpentry business, and was about to start a high-end custom cabinetry shop. Then we talked about his bike. It was a custom Titan Bobber Softail, which goes for more than $25,000 new. He was very proud of it, but he was hoping to sell it while at the Rally and get something a bit more comfortable for the ride home.

We parted ways, after I made him show me his bike (I might have been very tempted to buy it), and I walked away, wondering if he was an anomaly. I mean, you don’t usually think of successful small business owners when you imagine a “biker.” Well, if I learned one thing in Sturgis this year, it’s that I was very wrong. My bourbon-sipping friend was in no way atypical. In fact, he was in the majority. Sure, the old-school boys on big hogs and wearing colors anyone who has seen “Roadhouse” would recognize are still there. And super-friendly and welcoming, in my experience. (One guy, a half-blood Lakota Sioux from Wyoming who was staying in my hotel, shared a rum and Coke with me and we talked about his prison time, showed off our tattoos and argued a little about politics.)

But the young blood, chain and gang crowd is in the minority these days. Instead, bikers are more likely to be in their 40s and 50s and fairly well-heeled. Literally. One pair of boots I looked at was “on sale” for $600. According to research by the Insurance Institute for Highway Safety, the typical motorcycle owner in 2009 was 41 years old, up from 1998, when the typical owner was 38, and a leap from the typical 24-year-old owner in the 1980s. And women are getting on two wheels in greater numbers, too, though slowly. The ladies make up about 10 percent of the biker population, and growing.

As has been true for a long time, the Institute says recreation is the top reason people cite for riding, but transportation climbed to second place, ahead of short-distance touring in the council’s 2008 owner survey. The group cites high fuel costs, environmental concerns and convenience as possible explanations for the change. Fuel costs and the environment are not your stereotypical biker concerns, are they?

So, this is an ever more affluent, frequently retired and, in any other population, a super desirable group of consumers. Which leads me to ask, where the hell were all the brands? The 2012 Rally had more than 445,000 bikers on the blacktop this year, 30,000 more than last year. That’s half a million people with the disposable income to own a motorcycle and go on motorcycle vacations. The sponsors and brands on the ground were all the ones you’d expect: insurance, bike manufacturers and Jack Daniels. The only exception to the endemic epidemic was History, which brought its Cross Country Cookout mobile barbeque to Sturgis to wrap the tour with a roar.

So, shame on you brands who didn’t come. You missed out, big time. And I can’t think of a good reason why. So, see you next year, I hope, ‘cause these bikers are a big-time consumer V-twin powerhouse, and you’re sitting on a Segway.

History
A&E network History wrapped its first-ever Cross Country Cookout, a nine–city tour of American festivals, in Sturgis, bringin’ good, free food to the masses out of the Ultimate Smoker and Grill rig. A barbeque chef helmed the truck and since most of the trailer was grill space, it had the capacity to cook up to 2,000 pounds of BBQ at once. And needed it all. The channel’s stars came out to meet and greet, including folks from shows “American Pickers,” “American Restoration,” “Pawn Stars” and “Swamp People,” and the network recently launched a new special about the Rally, called “History Goes to Sturgis” all about the stars’ adventures on the road and at the Rally.

Rally attendees gnashed some locally sourced homemade sausage, brisket, beef tips or dry and wet pork ribs. The whole experience is about the idea of the backyard barbecue, which History thinks of as a uniquely American type of gathering, and how it wants its viewers and fans to think of the network as a brand that goes beyond the screen and represents the best that America has to offer.

“From a brand standpoint, we feel like we connect with the spirit and history of America and to us, nothing taps into that better than a good old American barbecue,” says Chris Meador, vp-consumer marketing at History. “[Cross Country Cookout] becomes a backyard barbecue and a way we can make some history ourselves across the country” (Agency: Civic Entertainment Group, New York City).

Insurance Wars
The gloves are off among the big auto insurers these days. They are among the very few industries that understand the value of the biker demographic, and they are fighting tooth and nail for a piece of the market. Progressive is—by far—the big dog in the fight, with about 90 percent share of the market, if combined with partner Harley-Davidson Insurance. Allstate and Geico are scrapping for most of the remaining 10 percent, and always nipping at Flo’s heels.

Progressive
Since they are so dominant in the space, Progressive Motorcycle Insurance didn’t see the need to go the official route and tap into Sturgis’ in-house marketing and signage. And it was better for its unsanctioned, outlaw style. The activation itself was a pretty simple carnival game. Barkers invited bikers to come over, grab a seat and shoot a stream of water at a target to race for the finish line. Winners of official heats got prizes like a carabiner pocketknife, sunglasses or, the most popular, a Progressive t-shirt-clad teddy bear. Everyone who played got a branded bandanna or some sunscreen. And a great time.

Geico
For this year’s Rally, Geico was a lead sponsor for the eighth year and moved into high gear to draw new customers and get the Gecko out all over its competition. As an official sponsor, Geico activated in two areas: Main Street and the Buffalo Chip concert venue and campground. The Main Street activation featured a Meet and Greet the Gecko experience, where the brand’s amphibious mascot, dressed in leathers, walked around and took photos with the bikers. The Buffalo Chip area, like most of the rally, was covered in Geico signage, and also had a photo activation with Casey Mears’ No. 13 Geico Ford Focus NASCAR on display. The brand also commissioned a custom-built Geico chopper created by Paul Teutul, Jr., of the Discovery Channel’s television show, “American Choppers: Senior vs. Junior,” which also was displayed at the Chip from its unveiling on Aug. 6. The bike was built in honor of the military.

Allstate
Another official sponsor, Allstate also took booth space on Main Street, in two footprints. In the big location, the brand did a data collect for lead generation through a sweepstakes for an Allstate-painted Arlen Ness custom chopper. After fans entered the contest, a brand ambassador gave each of them a motorcycle safety sticker and a plastic card that entitled them to a play at a Plinko board and a free t-shirt.