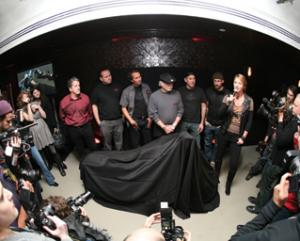 When Harley-Davidson in January revealed its new Forty-Eight motorcycle, all the details had to be spot-on. From the music, to the mood, the venue, even the booze (beer, whiskey and tequila), every element had to reflect the particular tastes of its newest group of prospective riders—those hip 18- to 34-year-old dudes who are into the American underground: tattoos, street art and rock music. Appealing to this cool crowd is a key strategy for the Harley brand as it rides into the future.

But what is even more cool is how Harley extended this event, which was open only to select media and influencers, to its dealers, who were attending a winter meeting in Texas. Here’s what the dealers saw, and how Harley included them in the action. And here’s why we say you should STEAL THIS IDEA.

LOCATION, LOCATION
The Forty-Eight belongs to Harley’s Dark Custom family of motorcycles. Matte black and minus the shiny chrome that accents other models, the Forty-Eight is a “city bike with curb appeal and sex appeal,” says Paul James, director of product communications at Harley-Davidson. The venue had to reflect that aesthetic, plus be comfortable, hip, able to accommodate two bikes on display and appeal to the riders and chopper enthusiasts in attendance. “It was about showing these folks the motorcycle in its element,” adds James. The answer was Liberty Hall in the basement of relatively new Ace Hotel in New York City, a hotel known for its edgy, counterculture appeal.

TIMING IS EVERYTHING
The sneak preview took place the night before the New York Cycle World International Motorcycle Show, which was held Jan. 22 to 24 at the Javits Center, so Harley was able to capitalize on the media hype surrounding the show. Working journalists held one-on-ones with the motorcycle’s designers in the afternoon, before the party started.

BIKER APPEAL
Besides the hand-picked audience of media, bike riders and local scene-makers from the alternative and music communities, this event revved up the star power. Willie G. Davidson, svp and chief styling officer at Harley, who is a direct descendent of one of the company’s founders and a legend in his own right, along with global cmo Marc-Hans Richter and the Forty-Eight design team introduced the bike before the official unveiling. Davidson and Richter mingled with the crowd and talked about Harley’s positioning and its strategy to appeal to younger riders (besides throwing cool parties!)

DETAILS
In keeping with the night’s back-to-basics theme, cans of Miller High Life and bags of popcorn and peanuts were served against a backdrop of chain-link fences and vintage bike imagery as a dj spun rock tunes. And even more important, besides the Harleys lined up on the street that attendees rode to the party, were the two new bikes inside for people to straddle and photograph with themselves at the handlebars. Custompainted peanut tanks, which is the fuel cylinder used on the Forty-Eight, were on display while a Harley styling team customized additional gas tanks with freehand art designs.

HIGH-TECH TOUCH
Mirrorball, New York City, which handled the event, utilized proprietary iPhone software to manage the guest list. The iPhones had the guest list built-in, so as people arrived and checked in with greeters, their names were simultaneously erased from all the phones. “We didn’t need a printed guest list,” says Michael Blatter, ceo at Mirrorball. “You do it all with your fingers. You zip right through, find the person’s name, click it and it’s gone from the other iPhones as well.” He calls it a breakthrough in event marketing. We call it a cool high-tech touch.

BONUS POINTS
Harley definitely scored extra points by extending the action to its dealers who were stuck at a winter sales meeting miles away in Texas but were able to experience the reveal along with the public. The brand shared video footage from the party and streamed a live feed from the show floor of the Javits Center showing customers’ reactions to the motorcycle. “It gave dealers a real sense of the excitement and vibe and the energy of the launch,” James says. And got their motors running. EM