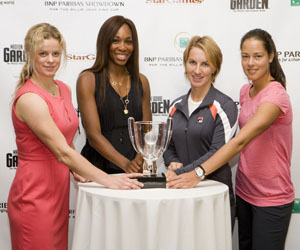 Today, four of the top women’s tennis players in the world will battle it out on court at the BNP Paribas Showdown for The Billie Jean Cup and $1.2 million in prize money. The tournament will also serve as a platform for numerous partnerships designed to increase awareness and participation in the sport itself.

Besides the on-court action, the Showdown has partnered with Tennis Night in America, an initiative to enroll new players into the sport. More than 1,000 clubs will enroll players into organized U. S. Tennis Association spring and summer programs; many of the clubs will host viewing parties of the Showdown. Also on the same night, the International Tennis Hall of Fame will announce its 2010 induction class and the Tennis Industry Association will culminate Racket Up America, a grassroots promotion in which players vied to attend the Showdown and serve for a chance to win $1 million before the championship match.

French bank BNP Paribas is the title sponsor of the Showdown. Additional sponsors include Lexus, Delta, NASDAQ, FIJI water and others.

“Tennis has been a key part of the bank’s sponsorship for some time,” Edwina Frawley, vp-external communications at BNP Paribas, told Buzz. “Given the business that we do in the U.S.—we’ve had a corporate and investment banking division in the U.S. for just over 30 years—to be able to be title sponsor of the event brings brand recognition and a great opportunity to entertain clients at a really great event. The demographics of tennis viewers are very mixed, and we have clients that range from college students to corporate ceos, hedge fund managers and pension fund [managers]. Our clients are a mixture and that’s what we believe tennis fans also are.”