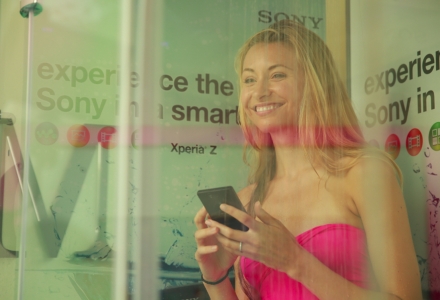 It’s not everyday you come across a swimsuit-clad model showering in a storefront, but that’s what consumers experienced this summer as Sony Mobile partnered with T-Mobile on a series of five stunts across the country to promote the launch of Sony’s water resistant Xperia Z phone.

Models wearing board shorts and swim tops stood in a glass-enclosed shower unit complete with Xperia Z branding, taking video and pictures and posting the images to social media to generate buzz for the stunt. While one model showered (they regularly rotated), the other drew in consumers with a call to action outside the store. By tweeting to @SonyXperiaUS with the hashtag #makeasplash, consumers were entered to win the phone. In addition to promotions on social media, local radio stations also generated buzz, broadcasting from the stunt sites on the event day with music and their own contests.

Stunts took place at high-traffic store locations in New York, Miami, Chicago, Minneapolis and Santa Monica, July 19 through Aug. 3. The program complemented larger U.S. launch efforts surrounding the Xperia Z, including a launch party in New York City, a launch party at T-Mobile headquarters and a water demo display installed in 400 T-Mobile retail stores across the country. T-Mobile is the exclusive carrier of the phone.

“The overarching objective was to make sure we created a really fun and memorable experience for consumers and to maintain top-of-mind with sales associates and store managers, since we were launching with T-Mobile,” Adrienne Stimpson, director-channel marketing at Sony Mobile, told Buzz. “Based on the reactions and feedback, our mission was definitely accomplished.” Agency: iris worldwide, Atlanta.