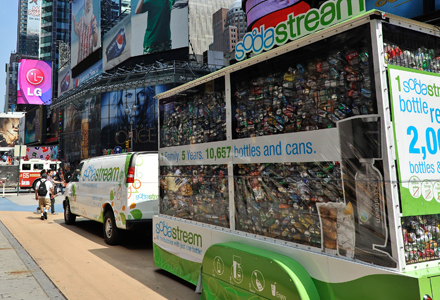 This month, at-home soda maker brand SodaStream is circling New York City with a 12-foot by six-foot cage atop a trailer filled with empty soda cans and water bottles equaling the average five-year waste of a family of four. The vehicle is part of SodaStream’s integrated sampling and social media campaign to get consumers excited about its soda maker as a gift for the holidays. The brand sets up a tent where it demonstrates how to use the machine and then has consumers taste the final product with the waste-filled cage in the backdrop.

“The one big differentiating feature from our product versus buying soda from the store is that we have completely eliminated bottles from the equation, so showing people what those bottles look like and that it is a staggering amount of waste that’s generated every year, gives them a reason to commit to this new system,” Kristin Harp, marketing manager at SodaStream USA, told Buzz. “New York is a terrific market for us to kick off our tour because it has great drinking water and it indexes high for seltzer water.”

New York is also the focus of SodaStream’s social media strategy, which includes smaller versions of the cage on two pedicabs that stop for photos in front of Big Apple landmarks like Times Square, South Street Seaport, the Cyclone on Coney Island and the Macy’s flagship store where the product is sold. The photos are uploaded to the brand’s Facebook page. For non-New Yorkers, the brand is doing a contest to see who can guess how many cans and bottles can fit into the Empire State Building. The winner receives a SodaStream.

Since launching the campaign, SodaStream has seen a 10 percent spike in Facebook friends. A tour out west is in the works. Agency: Eventive Marketing, New York City.