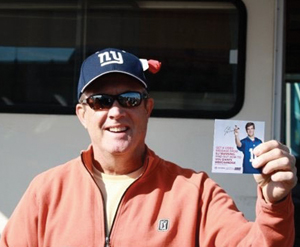 2D barcodes are two-dimensional codes or images printed on a product, sign or any item at an event or in a store. Major providers of 2D barcodes include JAGTAG, ScanLife and SpyderLynk. ScanLife requires users to download an application to their cell phones in order to use the technology. Jagtag and SpyderLynk don’t.

Consumers take a snapshot of the code with their camera phones and in return receive multimedia content—audio, video, pictures, text—sent directly to their phone. The codes make traditional signage more dynamic and offer a way to leverage sponsorship investments. As a result, brands are able to reach consumers when their interest is piqued, while scanning a retail shelf or hanging out in a sponsor booth at an event.

At the Winter Dew Tour in February, Nike put JAGTAG 2D bar codes on posters of athletes inside its igloo in the sponsor village. Attendees snapped the code and received a short video clip of the athlete on their mobile phones. At Comic-Con this summer, Fox Home Entertainment promoted its films “Dollhouse” and “Miss March” via JAGTAG 2D bar codes on models’ rear ends as they walked the show. For “Dollhouse,” consumers received a message from the show’s creator, Joss Whedon, and a coupon for a discount on the purchase of a DVD. “Miss March” respondents received a preview video.

In Denver at screenings of the Warren Miller film series, sponsor FirstBank utilized SpyderLynk’s SnapTag bar codes to connect with attendees who snapped the code for a chance to win skis or a custom snowboard. In the end, six winners came away with prizes. Others received a message about a promotion offering an iPod with a new free checking account.

“We wanted to set up a one-on-one conversation with visitors,” says Brian Jensen, senior vp-marketing at FirstBank. “We thought it was a great experience at Warren Miller and it helped generate a lot of excitement about the promotion.”

At Giants Stadium last fall, to promote its “It’s a Great Time to Sign” campaign, Toyota street teams handed out pictures of Eli Manning with a JAGTAG 2D barcode on the back. Fans who took pictures of the barcode received a video message from the football star. The barcodes provided an innovative way to connect with fans at the game, extending the reach and interactivity of its print campaign. The effort achieved a 9.2 percent engagement rate.

“For Toyota, mobile marketing is an important channel to engage with consumers when and where they want to interact,” says Paul Doleshal, New York New Vehicle Merchandise manager for Toyota. “JAGTAG offered Toyota the chance to provide a more interactive experience and include more dynamic content that helped consumers engage with the brand.” EM