The Big 3 Bring Some Detroit Thunder to NAIAS – Event Marketer 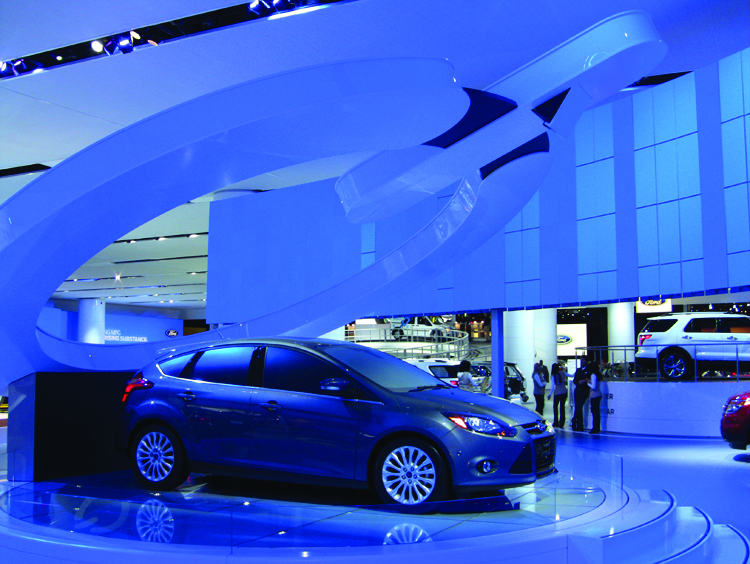 The Big 3 Bring Some Detroit Thunder to NAIAS

Last month, the Cobo Center in Detroit played host to the largest automotive show in the country and some of the largest and most elaborate exhibits and consumer activations in the industry. EM was there to bring you the highlights.

Ford went all out with the biggest footprint at the show but used it judiciously with wall-to-wall attendee engagement activities ranging from the fun and silly “How much can you tow?” rig that turned people into plowshares, to an elevated track that featured the only moving vehicles on the show floor—Ford’s new all-electric Transit van and Focus models (Agency: Imagination, Detroit).

GM took some old tricks and made them brand new, using technology that’s new enough to be exciting, but accessible enough to get the job done. Instead of touch screens, GM’s kiosks were usually no-touch “wave” screens and buttons. A photo activation using 27 cameras, timed just right to create a 180-degree motion shot next to a sweet Hot Wheels co-branded 2011 Camaro was the centerpiece of the footprint, and deservedly so. And though video gaming was a huge part of NAIAS, no one but Chevy took the newest and coolest, Microsoft Xbox Kinect, and made a custom game and put it out there in five gaming areas for head-to-head play.

The Dodge and Chrysler space was almost a big interactive zero, though the cars and trucks were sweet. But the automaker saved some bacon with four beautiful, airy cylindrical meeting rooms at the front of the space which, when empty, were great spots to rest the aching dogs. When business needed to get done, the doors slid closed for privacy and the space became a near-soundproof meeting pod. Nice save. And the “Call of Duty” Wrangler was pretty badass, too (Agency: George P. Johnson, Detroit).

Toyota came out of the gate with a unique multi-touch wall that made everyone else’s touch screens look like an Apple 2e. The biggest auto company in the world didn’t forget that Americans like efficiency, but love, love, love power, so it hyped up its NASCAR sponsorship with a full room dedicated to the stock car and its awesomeness (Agency: George P. Johnson, Detroit).