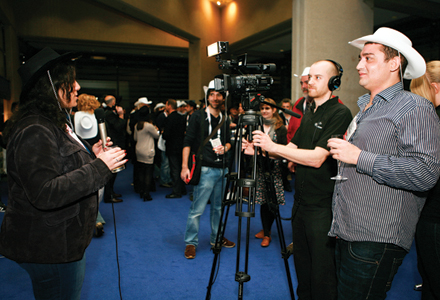 The b-to-b trade show world gets a bad rap for being behind the rest of the event marketing industry when it comes to innovative experiential tactics, but the SES Worldwide Conference and Expo Series is out to remove that stigma with some seriously exciting ideas about how to present a trade show that’s entertaining and relevant to attendees while providing big-time results to exhibitors and sponsors. A little background: SES Conference & Expo, owned and operated by Incisive Interactive Marketing, based in London, is the biggest global event series dedicated to SEO and sets out to educate industry heavy hitters about search strategy and social marketing, focusing on tactics and best practices. Speakers are drawn from top industry experts and from the leading search engines like Google, Bing and Yahoo!. Conferences are hosted in Berlin, Chicago, Hong Kong, London, New York City, San Diego, San Francisco, Shanghai, Singapore and Toronto throughout the year, drawing 25 to 30 exhibitors and sponsors and up to 2,500 live attendees to each event. It added locations in 2011 and is exploring an expansion into South American markets in 2012 or 2013.

The success of the SES events is not hidden in a secret sauce. It comes because the organizers set themselves up as solution providers for attendees and create a platform for their exhibitors to do the same. Microsoft’s Bing search engine is a premium sponsor of SES events all over the world because, “Microsoft really values the service model [at SES] and interacting with our customers and clients,” says Angela Dunham, marketing manager for Bing at Microsoft. “We invest the money to go out to these events in order to get the face-to-face interactions that are key to attracting and retaining our customers.”

How does SES provide Bing and its other sponsors with those key opportunities? Here are four of the most interesting ways:

Roundtables. SES in 2011 for its Toronto event launched a networking opportunity it calls the Meet the Experts: Round Table Forum. Show organizers place subject matter experts, sometimes provided by exhibitors, at tables around a banquet hall and invite attendees to hit them up for practical advice and troubleshooting help with day-to-day SEO challenges. The first rule of Meet the Experts: you do not talk about sales. There’s no agenda, just attendee-driven question and answer sessions. The attendees skip around, trying to get answers from the most relevant experts, who are always the engineers and technical people who design the tools the attendees work with every day, so they can answer the hard questions and get the job done. Check out the video at: http://www.youtube.com/watch?v=hgRYnj6vE3g .

Audience Choice Sessions. Before SES San Francisco 2011, the brand took to Facebook to ask prospective attendees industry-wide what they wanted to learn about at SES. The community on Facebook was invited to submit two-minute videos proposing session topics and defending the idea. They had to provide a session title, an abstract of less than 150 words and speaker suggestions. SES evaluated the ideas and chose two of them to go live at the event. The two people who submitted the winning ideas each received a free pass to the conference, a hotel in San Francisco for two nights and round trip travel expenses. It was so successful it was deployed again for SES New York City this year.

YouTube Channel. Incisive realized that it was shooting a ton of video content at the SES shows, and that footage wasn’t getting well-leveraged, so it created the (now three-year-old) YouTube channel at youtube.com/sesconferenceexpo. It has more than 1,600 subscribers and almost half a million views, and all of that traction serves to suck attendees off the web and into the conference centers all over the world. It draws enough revenue from advertising and tracked registrations to pay for itself and diversifies the traffic that gets directed to the main SES page. Why YouTube instead of a proprietary microsite? Well, YouTube, owned by Google, is now the second largest search engine on the web in its own right. How’s that for drinking their own Kool-Aid?

Black Hat, White Hat: Unconferenced. One of SES’s most popular attractions is its “unofficial” unconference. It invites attendees to identify as “white hats” who follow the search providers’ rules about how to improve SEO or as “black hats” who will do anything to get a higher ranking, no matter the rules. (Yes, they even wear the Stetsons.) It’s been around since 2010 and is always packed. Check out the video at: youtube.com/watch?v=ITeo6pbYekI. Basically a social event (they serve drinks to lubricate the room), the discussions range from fair practices to Machiavellian arguments about the end and means of SEO. (SES says no one’s ever been decked, so far.) There are no formal presentations, just general discussions about the issues and it is so popular it’s been repeated at every SES conference since its debut and is considered by attendees to be a must-attend closer to the conference. EM