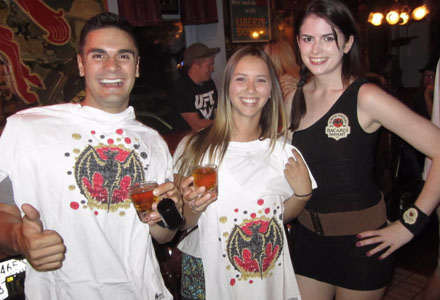 The brand best known for its Puerto Rican rum has never had a spiced rum offering… until now. As its first entry to the spiced rum category, which has been dominated by a well-known pirate brand for years, Bacardi OakHeart set out to create a spirit that rum drinkers would love, liquor snobs would appreciate and everyone could drink straight or mix with cola.

The brand spent three years developing the flavors and polling consumers for the name, which is derived from the oak distilling casks, and spent one night on Sept. 15 giving more than 30,000 consumers across the U.S. a chance to taste OakHeart and compose a three-word toast for a chance to grab an exclusive branded stein and a shot at the grand prize “The Barrel,” filled with branded gear. That night was the kick-off of an ongoing three-month campaign. The brand’s true goal was to get “liquid to lips,” and collect some social media buzz through the brand’s Facebook page.

“As they tried the sample, they got a chance to compose a toast, which helped consumers think about their outlook on life as it tied to the brand,” Brian Shaifer, senior brand manager at Bacardi OakHeart, told Buzz. “We’re looking at a consumer need. They’re looking for a spiced rum and we felt that if we are the leaders in rum, we need to act as such and get out there in this segment.” Agency: Team Enterprises, Ft. Lauderdale.