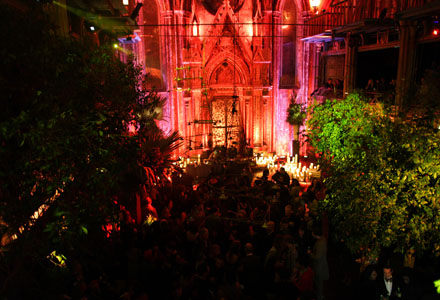 Art and fashion magazine BULLETT on Dec. 8 celebrated its one-year anniversary by turning its winter issue “The Secret” theme into a live secret garden party at the gothic revival synagogue Angel Orensanz Foundation on Manhattan’s Lower East Side. The secret garden theme started with an invitation to guests announcing the magazine’s anniversary party at an undisclosed location, which was revealed near the date. The package included a skull amulet giving guests access to the party. On event night, celebrities, magazine contributors, potential collaborators and advertisers were guided through a dark maze filled with overgrown moss and smoke.

Inside, the décor included branches, moss and trees made to look like a secret garden that guests could meander through. Michael C. Hall of Showtime’s “Dexter” series, and the face on the cover of BULLLET’s anniversary issue, hosted the evening. The centerpiece was a large Tree of Secrets where guests were encouraged to write their secrets down on a piece of white paper and clip it to the tree’s branches. The experience also included a vintage photo booth where guests could choose from props, such as furs, guns and trumpets, for a Polaroid shot in front of a forest background. Guests were also treated to music by Crystal Castles and could retreat to viewing areas to watch BULLETT magazine videos projected on the walls of the venue.

“We wanted to have an experience that felt both lively and intimate,” Carrie Rosten, chief brand officer at BULLETT Media, told Buzz. “Additionally, we wanted to celebrate the brand’s anniversary in our hometown. Most importantly, it was an opportunity to thank our partners with a fabulous party, as well as entertain potential clients and collaborators for the future.” Agency: Silkstone Events, New York City; STATE Public Relations, New York City.