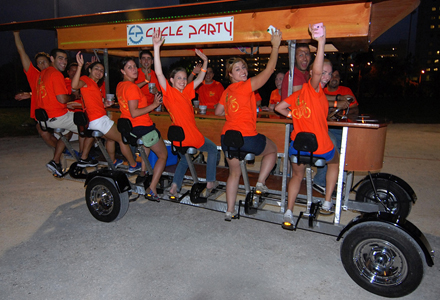 To celebrate Queen’s Day, a Dutch national holiday, beer brand Grolsch in Miami partnered with local bike group The Miami Bike Scene, the Grand Central Park non-profit organization, and the Dutch Consulate to turn the monthly Miami Critical Mass bike ride into the Go Dutch! bike ride on April 27. The ride wound through the city and ended at Miami’s Grand Central Park with an orange festooned festival to celebrate the beer and the holiday. The brand handed out 800 branded orange shirts to the bikers at the start of the ride to punch up the visual impact of the 2,000-rider event.

The brand erected a 20-foot by 20-foot tent in the middle of the park for the Go Dutch! celebration. Inside the tent Grolsch set up carnival games with branded swag for prizes and a photo activation with a professional photographer taking pics of fans with a Grolsch “Get-In-Touch-With-Your-Inner-Dutch” backdrop and the Grolsch-branded bicycle. People dressed in costume pieces to spice up the pictures.

The festival included large tents for four restaurants, which sold Dutch inspired food, and two bar tents where Grolsch was the exclusive beer and attendees could try the exclusive drink, the “Double Dutch,” a Grolsch with a shot of Dutch gin. Music pumped from a dj vehicle manned by Dutch djs and guests caught a screening of a movie created for the event with clips of Queen’s Day in Holland, images of previous Critical Mass bike-rides and the latest Dutch Grolsch commercial. On a stage near the Grolsch tent, people competed in a best-dressed contest with a Grolsch bicycle as grand prize where contestants had to “sell themselves” to the crowd. The one with loudest cheers won the bike. The brand loved the event so much it is already planning to repeat it next year and is exploring the possibility of taking the program to other markets across the nation.

”We were looking to increase brand consideration and awareness about the beer’s Dutch heritage,” Ethan Ganot, associate brand manager for Grolsch at MillerCoors, told Buzz. “We really wanted to make it about what Queen’s Day stands for with the Dutch people, and the biking scene is very important to the Dutch.” (Agency: Team Enterprises, Ft. Lauderdale, FL).