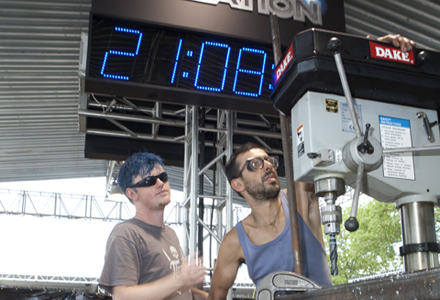 Red Bull energy drink set 16 teams of elite “makers”—a demographic made up of eco-conscious do-it-yourselfers and amateur inventors—to work in Brooklyn, New York, from July 7 to 10 for its Red Bull Creation contest. The idea was to build a vehicle out of found objects that could move a person 200 feet, using no fossil fuels. And boy did they. From the wedgie-powered trampoline cart to the steampunk-inspired railroad handcart to the robotic Santa’s sleigh, the makers went all-out. Thousands who poured in from all over the five boroughs were spending cash for Red Bull’s drinks, and more importantly, spending quality family time with the Red Bull brand.

Red Bull refused to speak to Buzz, but Jason Naumoff, an avid maker and marketer who conceived and handled the event and presented it to the brand five years ago, told us, “Red Bull saw the incredible power of the maker movement and finally decided to go ahead.”
The first 72 hours of the Creation event was consumed with a build-a-thon by the 16 maker teams from all over the country, and culminated in the Creation event on July 10. On the final event day in Brooklyn’s McCarren Park, the brand set up a main stage where epic entertainment masters Eclectic Method and That 1 Guy kept the excitement levels high in between the presentations by the sixteen teams competing for the $10,000 prize and an equal value in tools. In the center of the park space, a warehouse-like cluster of pods displayed the 16 inventions and the attendees get a chance to talk to the makers and get some insights into the creations and the process. For some family fun, there were robotic water balloon launchers and goofy folks in costumes who acted as targets.

Off to the side, in the much-needed shade, families got a chance to add to the creative atmosphere with two walls of Open Space, where they could use paint, bits of rope, beads, nails, chain and anything else they could find to help create a piece of spontaneous art, which will remain in McCarren Park. In the shade of a branded tent, Red Bull was selling water and energy drink cans by the dozens to the thirsty crowd. Agency: Live Live Media, New York City.