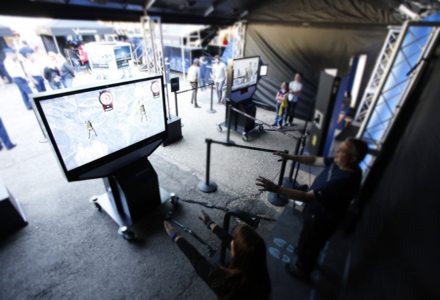 United States Air Force mobile tours have allowed people of all ages to learn about the service opportunities and high-tech world of its branch of the military. But its latest mobile tour, Rapid Strike, which launched Oct. 18, is allowing attendees to actually step into the shoes of service men and women and experience a mission within a 14-seat simulator ride.

The simulator, which the Air Force developed and built over a 15-month period, gives attendees a six-minute mission experience which includes an F-22 flight, C-17 cargo drop, combat controller ground surveillance, satellite communications and a Reaper missile strike from a first-person point of view. After experiencing the ride, attendees can scan various QR codes located throughout the activation that offer video content highlighting the careers depicted in the film. One QR code connects to a mobile app which functions essentially as a compass, using Augmented Reality to highlight the actual military assets in the simulator film as an attendee moves his or her smartphone about the activation.

The mobile tour will roll into a variety of locations, big and small, across the country, through April 2013. While the simulator is the main attraction, the footprint may also include two additional experiences depending on the location. Each site includes informational booths and local recruiters who are there to interact with attendees and answer questions.

The additional experiences include a special ops high altitude military parachuting jump simulation, where attendees are connected to a console and can manipulate avatars on a digital screen as they jump from the back of a plane at 30,000 feet. In Become An Airman, visitors are able to pose in front of a green screen, flip between uniforms of the individuals depicted in the simulator and have their picture taken which can be automatically shared on their Facebook page. All attendees register using an email and, if they choose, Facebook. They are later emailed a digital package containing Air Force-themed wallpapers, ring tones and other content, as well as the image from the photo activation.

“The objective of this is to continue to inspire America’s young men and women to consider the Air Force if they’re looking for an opportunity to serve their country, first of all, and an opportunity to further their education and learn a skill or trade that interests them,” Col. Marcus Johnson, chief of strategic marketing at the Air Force Recruiting Services office, told Buzz. “The simulator just gives them an opportunity to see that we do more than just fly airplanes.”

Col. Johnson called the simulator one of the Air Force’s “inspirational assets,” and that it is intended to capture the interest of a wider audience, not just those of recruitment age. “Many of the folks that participate in the ride are teachers or coaches from the local schools and parents, and while the Air Force is not for everyone, these teachers, coaches and parents may see their student or child and say, ‘Hey, maybe you ought to go see what the Air Force does because I saw Rapid Strike at a festival and thought it might be something you’re interested in.’”

The tour schedule is still being finalized, but those interested in catching it can check for updates on the Air Force Recruiting Services Facebook page, facebook.com/usairforcerecruiting, or at airforce.com/learn-about/events. Agency: GSD&M, Austin.