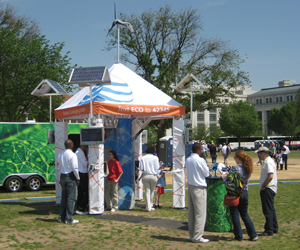 Solar energy was at the heart of AT&T’s display at Earth Day’s 40th anniversary celebration on the National Mall in Washington, D.C., where thousands gathered on April 19 to embrace green living and practices. Though branding was not allowed, the company’s signature colors and iconic blue globe gave its identity away, and attendees flocked to it to take advantage of its mobile services.

The exhibit featured 28 solar-powered charging stations that allowed people to connect a phone to a corresponding charging cord, lock it up in a small locker and then walk away with the key to return after touring the festivities. As part of its One Million Eco Challenge initiative, the brand also encouraged its customers to sign up to go paperless and thanked them with a tree sapling provided by its partner, the Arbor Day Foundation. iPhone users could download a carbon footprint calculator app that helped them figure out their carbon footprint and then provided tips on how to reduce it.

“We wanted to consume less while empowering our customers to do more,” says Mimi Chan, director-channel marketing at AT&T Mobility and Consumer Markets. “The use of solar panels at the AT&T kiosk was a way to organically integrate Earth Day and AT&T’s environmental sustainability efforts.”

Eight solar panels atop a truss canopy that shaded the display powered the experience. A small windmill attached on top generated additional energy for the batteries used to draw power for the charging stations (CSE, Atlanta; PierceSmartfusion, Portland, ME, handled).

The event also served as the ideal launching pad for AT&T’s newest technology, the Zero Charger, which doesn’t waste power when left plugged in (a standard charger left plugged in wastes enough juice to power 24,000 homes for a year). Folks could learn more about this product and where to buy it at local retailers. “This was a high-profile event that afforded us the opportunity to showcase some of our efforts to more than 150,000 activists,” says Chan. We’re feelin’ recharged already! EM