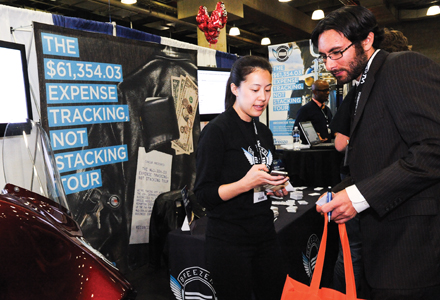 How B-to-B is Evolving Fast

B-to-B events, like everything else, are changing fast. Hybrid events, no doubt, are the hottest thing on the event marketing planet, but other trends are taking hold in the world of internal meetings and corporate conferences. Buckle up, dear readers, for a spin past five signposts in the current b-to-b landscape. And see if you can find the common thread connecting them all.

B-to-B is now B-to-E, as in Business-to-Everyone. Your target audience no longer thinks of itself as “consumers” or “business people.” They just consider themselves people, and that is how you should engage them. The best b-to-b campaigns have more of the marketing savvy traditionally associated with consumer efforts, all in the hope, of course, of driving sales and demand.

Like the $61,345 Expense Tracking, Not Stacking Tour—a cross-country program targeting small- and medium-sized businesses (SMBs) by Concur Technologies’ Concur Breeze, a cloud-based expense tracking solution. Three teams of riders, known as the Breezers, on Harley-Davidson motorcycles, kicked off a nationwide tour from New York, Chicago and Seattle. They purchased expense-related items for SMBs, allowing them to see the product demos during real, live purchases. Their progress was tracked on a microsite that also linked up to a social media campaign. (Agency: Jack Morton Worldwide, New York City.)

“Automated expense reporting is not the sexiest thing to go out and try to sell,” says Steve Jarvis, vp-marketing, SMBs, at Concur. “That was one of the attractions of this idea, having some fun with and humanizing something that most people would detest, which is filling out their expense report, in a fun and engaging way.”

Thomson Reuters’ global launch last year of Eikon, its financial desktop platform, to the business community is a case study in b-to-b as b-to-c (Jack Morton also handled.) To generate awareness and drive interactions and demos, it activated Go Live events in 14 cities targeting Thomson Reuters’ most influential decision makers. Video street teams broadened the effort, recording financial professionals’ thoughts on what they would like to see more or less of in the industry. The videos ran on LED boxes in London and New York City. The campaign included a street-level art installation and a competition to win a trip to the South Pole.

“There are opportunities out there to create something that will differentiate you,” says Lee Ann Daly, evp and cmo at Thomson Reuters. “You have to be brave, stand behind an idea and push for it. You can’t underestimate how much events like Go Live created confidence among the sales force.”

B-to-B goes for Maximum Impact. The one-time annual blowout event is a thing of the past. In today’s business environment, reach and efficiency are keys to any successful experience. MetLife’s Day One, a week-long celebration of its acquisition of Alico last November, spawned 60 events that touched 70,000 employees in 64 countries, and exemplifies reach and efficiency at its best (TBA Global, New York City, handled).

After MetLife in March 2010 acquired Alico from A.I.G. in a $16.2 billion deal, it needed to integrate 18,000 new employees and emotionally engage both groups, including legacy employees, in the new organization. An engagement team consisting of eight regional communications directors created Day One digital toolkits, available on a microsite and listed by region, country and language (19 of them!), of approved Day One MetLife brand assets, including logos, photos, videos, brand identity guidelines, talking points and templates, which each location adapted to its own cultural differences for its unique Day One experience. The result varied from elaborate 4,500-employee meetings to intimate gatherings within small offices, but it worked, with events happening all over the world at different times throughout the week.

“The beauty of it was the simplicity,” says Karen Horn, vp-internal communications at MetLife. “In a global company, one thing does not fit everybody, regardless of what it is. Respecting the differences and providing professional tools, and the fact that we gave them so much went a long way for them and allowed us to have control of one message. Day One still resonates with people.”

B-to-B goes 3D. As 3D technology becomes more affordable, so does the interest in it among pharmaceutical companies and sports teams and just about anyone with a physical product. What used to be a Hollywood gimmick is now an effective way to engage audiences at internal events and meetings. Heck, in two years will anyone be shooting film in 2D?

Pharma company Galderma, looking for impact and innovation to set the tone for a week-long sales meeting last January, found the answer in a six-minute 3D video, “Building Galderma Together,” that combined live action and 3D visual effects to excite attendees and reinforce the theme of the meeting. The film starred 50 employees, primarily executives and sales and marketing team members, using power tools and construction equipment to build a 3D skyscraper. It played on a 70-foot polarized custom-made wide screen that captured the audience from the get-go (Viva Creative, Rockville, MD, handled.)

“We expect a lot from our sales team,” says Chuck Paschke, director of meetings at the Swiss-based global dermatology company, perhaps best known for its Cetaphil skin lotions and cleansers. “We expect them to be different, and we strive to use those same strategies when we get them together. We don’t take meetings lightly. We want to provide the same innovation, creativity and impact with them that we expect them to have with their doctors. They are still talking about it.”

B-to-B gets Up Close and Personal. The best meetings and internal events are engaging audiences in fresh and more collaborative ways. Flash mobs and team building activities are among the latest.
The Society for Human Resource Management (SHRM) kicked off the opening session of its June 2010 annual meeting with a choreographed flash mob that included 12,000 attendees (inVNT, New York City, handled.) Set to the tune of the Black Eyed Peas’ “I Gotta Feeling,” the action began with a lone lighting technician on stage with a light meter. He was joined by two young guys who started dancing to the music. The staff joined in, and soon people in every section were feeling the vibe.

“It was fun and a surprise,” says Lisa Block, director of meetings and conferences at SHRM. “It gave people something to talk about.”

Team building exercises that include everything from yoga classes and make-your-own-cocktail mixings to poker tournaments and kick-ball games are another way to boost morale at b-to-b events.

And just plain ol’ have fun, which was the case at a senior staff meeting at NERA Economic Consulting that took place last September that incorporated wine and food tastings and volleyball games into a meeting that brought together 220 people who don’t see each other all that often, says Angela McLean, events manager at NERA. “The meeting was intense, but the teambuilding exercises gave everyone a chance to break away from the intensity and let their hair down,” she says (True North, Ridgefield, CT, handled.)

B-to-B is Still Live. Hybrid events are getting all the play these days as event organizers tap into technology to extend their meetings and conferences onto the web. As well they should. However most still embrace the face-to-face meeting for reinforcing relationships. As Dawn Cooper, corporate events manager at Toshiba America Medical Systems, puts it, “While technology is great for web-based training and technical information, it can’t replace the handshake.”

Cooper finds that the pendulum, which in the recent past swung more toward cyberspace and the virtual, is swinging back to a more moderate application of technologies. Toshiba’s national sales kick-off meeting this past May began with web-based apps and video teasers that paid off at the live event. Still, she says, “You can’t replace the nuances of building a relationship face-to-face, of putting names and faces together, meeting new people. I don’t think as human beings we can replace that type of interaction. It’s always difficult to quantify the success or value of human interaction; sometimes there’s no way to put a price tag on it.”  EM