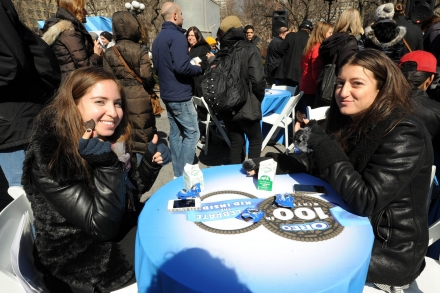 OREO Throws Itself a 100th Birthday

OREO, the iconic chocolate sandwich cookie with the creamy filling sold by Kraft Foods, on March 6 celebrated its 100th birthday with surprise parties in seven U.S. cities, including a flagship event in Los Angeles where country music group Lady Antebellum performed several songs including, of course, “Happy Birthday.” Additional parties were held in other cities around the world The parties were part of a global campaign that includes in-store, print and TV advertising and digital initiatives around the theme “celebrate the kid inside.”

The campaign is based, in part, on a study done by Kraft last year in which kids revealed that they need more carefree moments and moms indicated they want to connect with their kids in those childlike moments. “The study helped us realize that everybody needs to slow down and take a moment to enjoy, and what better way to do that than with an OREO cookie and a shared twist, lick and dunk ritual. We are bringing these slow-down moments to consumers around the world,” Jessica Robinson, associate director-consumer engagement at Kraft Foods, told Buzz.

In New York City, the fun kicked off at noontime in Union Square Park with streamers released into the air from an oversized blue gift box, followed by a dancing flash mob and an appearance by an Oreo Man costumed character, who mingled with the crowd. Afterwards, attendees participated in “Twist, Lick and Dunk” contests, “Lick” races and other activities while snacking on Oreos and milk supplied by local producers. Besides L.A. and New York, parties took place in Chicago, Miami, Phoenix, Pittsburgh and Salt Lake City. They were held globally in nearly two dozen countries, for a total of more than 100 parties in places such as Shanghai, Indonesia, Canada, Venezuela and the Middle East. Digital efforts include a website, oreo.com/birthday, where consumers can upload photos, videos and stories onto an Oreo Moments Gallery. A “Million Moments Meter” tracks the submissions.

On its Facebook page, facebook.com/oreo, fans can send personalized birthday card greetings to family and friends, including a customized greeting from Lady Antebellum. Agencies: DraftfcbX, Weber Shandwick and Draftfcb, Chicago.