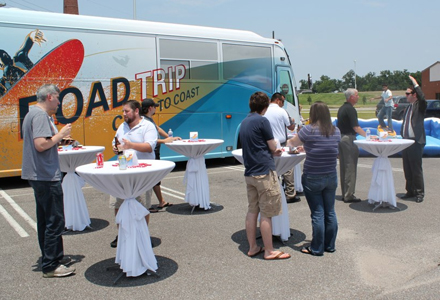 Oracle’s new Java Road Trip hit the road on June 17 and will stop in 17 U.S. cities where it will visit with its loyal Java User Groups, or JUGs, and let them know that they are a welcome addition to the “Oracle family” since the Sun Microsystems acquisition late last year. The Road Trip consists of a tour bus loaded with fun activities, food, Java programming experts and ice cold drinks. It is expected to conclude in September.

At each tour stop, Oracle visits local Java developers and members of the JUG, sometimes on an Oracle campus or at a local college or dedicated event space, and invites them to have snack, a beer, a ride on the surf board inflatable (check out the video) and learn about some of Java’s new capabilities along the way. The events feature demos of applications built on the Java platform, including Java Platform, Enterprise Edition 6, which was released in December 2009, NetBeans IDE 6.9, released in June 2010, and JavaFX.

The tour is also bringing a dedicated blogger along for the ride who is recording videos, interviewing developers and posting updates on the Java Road Trip website, on YouTube and on Twitter through the @Java Twitter feed and the hash tag #javaroadtrip. So far the tour has courted 1,600 attendees, 5,000 new Facebook fans, 2,600 Twitter followers and more than 60,000 hits on the microsite.

“We want the more than nine million Java developers out there to know that Oracle is dedicated to them and excited about Java,” Michelle Kovac, Java brand manager at Oracle, told Buzz. “This tour is saying to them, ‘Not only did we acquire Sun, but now you developers are part of the Oracle family.’” Agency: Relay Worldwide, Chicago.