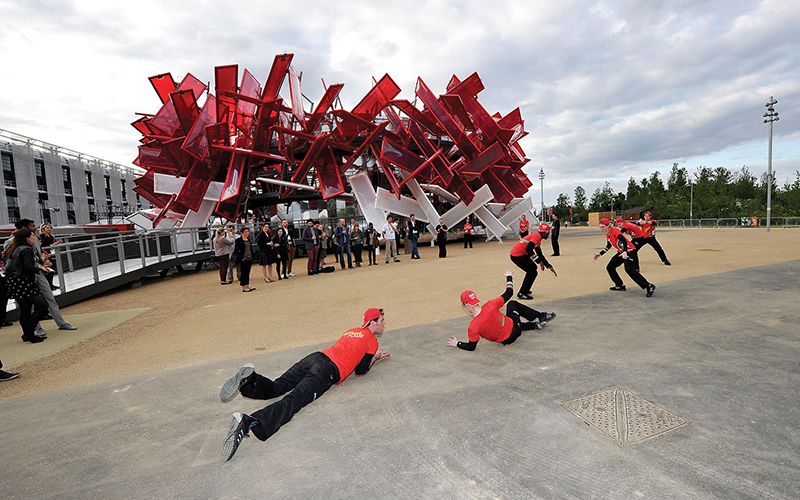 Some experiential programs are just too good to execute once and leave behind. The strategy is on point, the engagements generate authentic connections with consumers and the ROI is generous. Why mess with a good thing? Many brands don’t. From Coke’s Olympic Games sponsorship to LEGO’s KidsFest tour, plenty of brands resume the same program year after year, each iteration as fruitful as the last.

The continued success of these perennial events, however, requires some rejuvenation from time to time. To uncover the strategy behind effectively refreshing long-running programs, we asked top brands to dish on when it’s time for a campaign makeover and how to make it happen. Here, their tips for updating classic programs while remaining true to the original strategy.

Coca-Cola has sponsored every Olympic Games since 1928, targeting a global audience with global and on-site activations and sample distribution, with a focus on supporting specific Olympic teams.

“[Sponsors] are all operating in different product categories but we are all competing for share of mind of the audiences so we need to make it interesting and innovative,” says An Boon, Olympic Games marketing director at Coca-Cola. “This is where we work with many interesting agencies and experts in digital media, in social media—within the company—to bring some new elements into each campaign.” 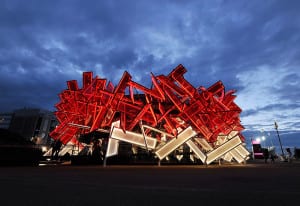 The Coca-Cola Beatbox is unveiled at the Olympic Park on July 19, 2012 in London.

“We really try to do something with our packaging, with our labels,” Boon says. “The Olympics is, for us, a very big effort, a big important moment in our activation calendar. And we believe it’s the right moment to bring some freshness to our labels, to the way we put our products on the shelf, to bring some newness to the consumers and to surprise them a little bit.”

Coke’s Olympic Games marketing director changes every three to three and a half years, meaning a different person takes the lead on each sponsorship, which “keeps things fresh,” Boon says.

This 45-year-old business event for media, analysts and employees offers a week of celebrations with thousands of Walmart’s hourly associates from around the world who are thanked for their work, treated to special events and immersed in the brand’s heritage.

Tip: Mix up the talent.

“We’ve always brought in celebrities or talent, so that’s a thing that’s constant but changes because every year we bring in new folks,” says Mark Henneberger, vp-shows and events at Walmart. “And every year we’ve had a different host, so that’s one of the things that keeps the meeting fresh.”

“The biggest thing that we hear after every Shareholders Meeting is, ‘What are you going to do next year to top this year?’” Henneberger says. “So there’s always that setting the bar a little higher, coming up with a different angle. We always try to figure out, what’s the theme? The business issues change so there’s always the opportunity to figure out what the ceo’s vision is for the year.”

Tip: Don’t get too comfortable.

“Always challenge the status quo,” Henneberger says. “Just because something worked, doesn’t mean you can’t improve upon it. I think that people sometimes get complacent. I think ‘comfortable’ and ‘complacency’ are probably the two worst words you can have in event planning.” 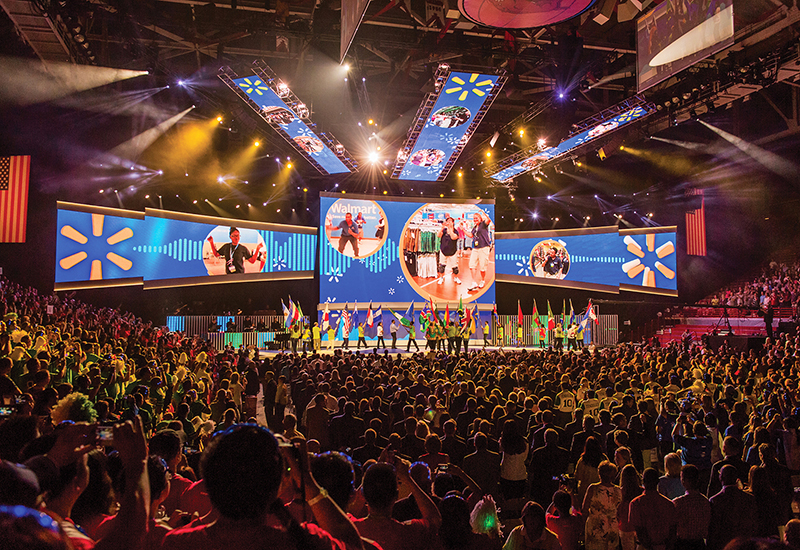 This 21-year-old US Open Tennis Tournament sponsorship uses a 20,000 square-foot footprint with a focus on servicing cardmembers and tennis fans.

“That core of how we approach the US Open doesn’t change,” says Deb Curtis, vp-entertainment and marketing sponsorships at American Express. “How we bring it to life changes because how you can service fans changes every year and that’s why technology has become such a critical component of really enabling us to deliver fan experiences like we haven’t done in the past.” 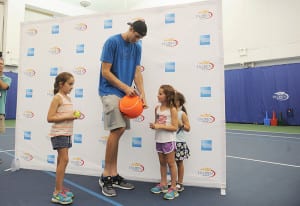 The American Express Fan Experience at the 2015 US Open In New York City.

“We have customer care professionals from our World Service organization on-site and hearing direct customer feedback helps make us better every year,” Curtis says. “The knowledge of our customers, the knowledge of observing fans and how they engage with what we create… I think enables us to have some unique insight into what the fans want and how we can create that for them.”

This nine-year-old interactive tasting experience is designed to promote The Macallan’s single malt Scotch whisky, and features a tutorial on how to taste the spirit. 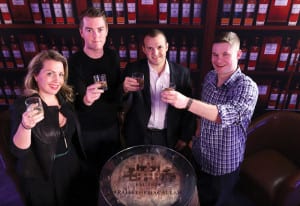 Consumers Raise The Macallaln for a photo engagement at the 2015 iteration of the event.

“I think we got stuck in our old ways of recruitment and there are so many new ways to reach our consumers,” says Samantha Leotta, brand manager at The Macallan. “The great thing about using social channels to recruit is that you can really target, in a very specific way, not only demographics but also preferences and like-minded brands that consumers associate with. It allowed us to… get the right people into the events, which has been an extreme improvement.”

Tip: Incorporate an educational element into the program.

“There really is a demand for an enhanced educational component,” Leotta says. “Whisky knowledge is social currency so we made sure to really emphasize those components as part of the overall presentation.”

“Prior to the event, during the event and even after, we built great equity behind our hashtag #raisethemacallan,” Leotta says. “It was the biggest engagement we’ve seen on our social channels since we launched.”

This six-year-old interactive tour brings the creative “hands-on, minds-on fun” of LEGO building and experiences together at an activity-packed family event for children of all ages. 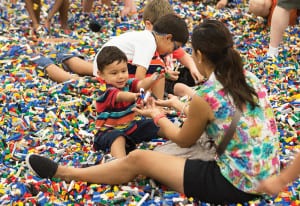 Families have fun in a giant LEGO pit at KidsFest 2015.

“We’ll bring new things in or change up some of the aspects of what’s on the show floor to reflect new products,” says Vince Rubino, senior manager-event marketing at LEGO. “So it’s a little bit of reacting to consumer wishes, and a little bit of here are some new products we can showcase.”

Tip: Change up the attendee base.

“We try to not to repeat cities back to back,” Rubino says. “We’ll take a year off so we can have some of that refreshment of content on the show floor. We also know that if we come back two years later, some of the consumers will have aged out and new ones will have aged in. Sometimes you don’t have to change the content, you sometimes just change the people who are participating.”

Tip: Observe and evaluate each engagement.

“We constantly walk the show floor and observe and see where the lines are or what are the more popular engagements,” Rubino says. “If this area is maybe halfway through the show and nobody comes back to it, maybe we should make that area a little more exciting. So observing is key and critical.” 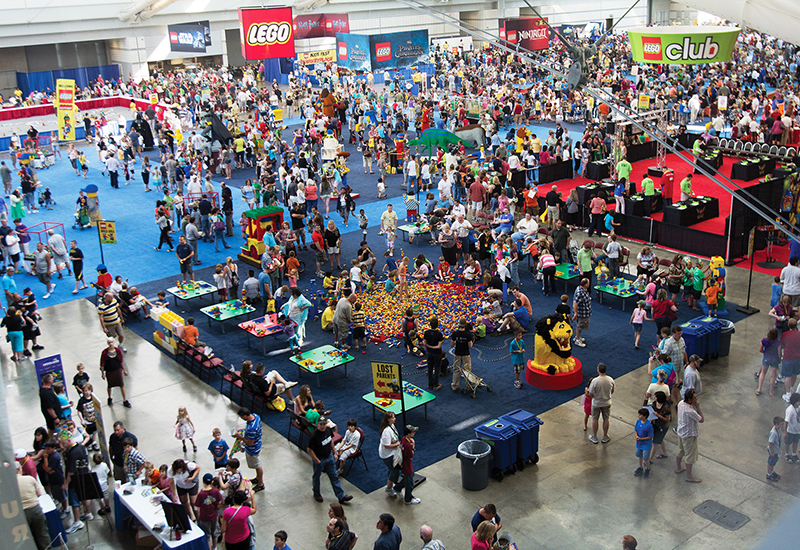 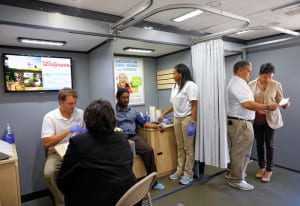 Inside the Walgreens Wellness Tour bus.

“We did Facebook updates and tweeted at a National Urban League conference and made sure we targeted people in the area so they would know we’re here, we’re with the Urban League,” says Malpica. “It was great because not only was it just the Urban League promoting the Wellness Tour as part of its conference, but also our own Walgreens page was doing it at the same time. There are lots of different communities through social media. Why not expand to those that are working with us?”

Tip: Have a sense of purpose.

“The most medically underserved communities or areas… are the ones we visit,” Malpica says. “That struck me as the most significant change from when the tour started to now. It kept the program fresh because it gave a new sense of purpose. Of course we were always out there trying to help people and trying to give free screenings… but now we’re targeting the communities that really are in need.”