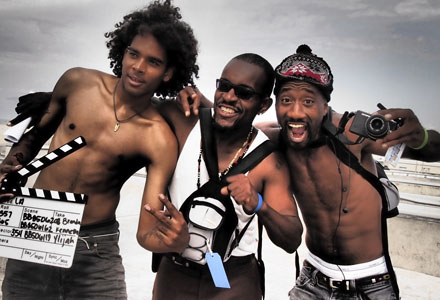 Olympus Surprises Consumers on the Street with Free Cameras

To create buzz for its launch of the PEN E-PM1 camera leading up to the busiest shopping season of the year, Olympus gave away 1,000 $500 cameras to consumers on the street and on a JetBlue flight. The brand kicked off its two-week Pen Ready Project on Sept. 19 at its headquarters in Harrisburg, PA, followed by stunts in Los Angeles, Miami, New York, San Francisco and Toronto.

Olympus put four teams of two in each market for an average of five days. The crew included a professional cameraman and an emcee that intercepted and interviewed consumers who they spotted attempting to take photos with a cell phone camera or a point and shoot, and handed them the free camera. The cameraman captured the interaction for footage to be used in online commercials. The emcee also captured their data on an iPad to create a profile on penready.com where they encouraged consumers to post a minimum of 20 photos taken with their new cameras to be entered in a travel sweepstakes. The images and videos posted are to be showcased on a Tumblr blog in the coming months.
“This is a fully integrated campaign that drives social buzz and sharing and also includes a paid online, social and mobile campaign during the holidays to drive purchase of the product,” Stephanie Sherry, director-marketing communications at Olympus, told Buzz. “We’ve always believed that getting our products into consumers’ hands is the strongest proof we can offer people about the benefits of our products.”
Olympus also surprised consumers on a JetBlue flight to Fort Lauderdale by giving every single passenger on the plane, including the flight crew, free cameras. Agencies: Grand Central Marketing, New York City; Mullen, Boston.
2 ARTICLES LEFT!
Subscribe Today and Get Unlimited Use of the World’s Largest Content Resource on Experiential Marketing