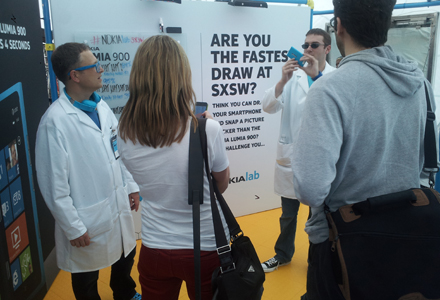 Finnish tech brand Nokia brought its state-of-the-art research and development laboratory to the South by Southwest Interactive, Film and Music Festival (SXSW) last week in the form of the Nokia Lab. From the outside, the three-domed, otherworldly space evoked the brand’s Scandinavian roots, partly thanks to the very aggressive exterior bubble cannons that created a downpour of bubbles resembling snow over the long lines of eager SXSW attendees trying to get inside. Once through the doors, guests got hit with some hot music and two drink tickets for the in-house bar.

The brand had its Lumia Windows phones on display throughout the space and was aggressively targeting its major competitors with some head-to-head racing to showcase the speed of the device’s camera. The idea was a simple one: a brand ambassador with a Lumia challenged all comers to a race, pitting their own phones against the Nokia phone to determine which could deploy its camera app and take a photo the fastest. The brand’s device beat almost everyone except for a few iPhones.
Elsewhere in the dome, the brand offered foosball, a Ping-Pong table, some comfy seats, a bar and a stage that featured live bands and djs every night of the interactive portion of the event. As an added bonus, Foursquare users could check in during the visit to unlock Nokia’s exclusive SXSW badge. All in all, one of the hottest experiences in Austin and certainly unique among brand activations at the festival.
2 ARTICLES LEFT!
Subscribe Today and Get Unlimited Use of the World’s Largest Content Resource on Experiential Marketing