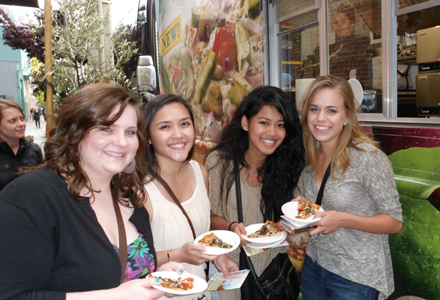 A Le Cordon Bleu trained chef running a food truck would have made most of us shrug with disbelief a decade or so ago when we associated these meals on wheels with unsanitary conditions and greasy fare. But today, with thousands of high quality—dare we say, gourmet—food trucks roaming the streets of American gastronomical capitals and an entire show on the Food Network, “The Great Food Truck Race,” hosted by celebrity chef Tyler Florence, it’s no wonder marketers have gotten behind the wheel and cooked up some delightful food truck experiences that are riding the momentum of this trend. And though the last year or so it seems like everywhere we turned there was some new branded food truck hitting the streets, there’s no sign of this trend slowing down for chefs serving up their culinary inventions or for marketers dishing out cool programs.

The game changer for marketers—and even chefs—has been social media. Who could forget the success of Kogi, the Korean BBQ food truck in Los Angeles, that sparked a wildfire of viral buzz announcing its locations on Twitter. Marketers took notice and brands like Bravo, to promote its “Top Chef Just Desserts” series, turned to food trucks fueled by social media to attract consumers last fall. Handling agency, New York City-based Grand Central Marketing, said the truck was the trending topic (one of the top 10 hashtags on Twitter) for that day.

“There’s something about these food trucks that has captured everyone’s imagination,” says Matthew Glass, president and ceo at Grand Central Marketing, who in March handled another food truck program for HBO’s promotion of its New Orleans-based show “Treme” and is in negotiations with two other clients for upcoming food truck programs. “It goes back to that Kogi truck in L.A. The association with these trucks and social media has added a whole new dimension from a marketing perspective. With Bravo it was very tied into Twitter and to the element of surprise. Not all of our clients are using them that way, but that’s kind of what made them hot to begin with.”

This summer, there were dozens of food truck programs on the road, some returning to the scene for a second year, like Familia Camarena tequila’s Taco Truck. After its success in L.A. and Nevada last summer, the brand launched its food truck in New York City this spring. Two additional trucks stopped in Austin, Chicago, Dallas, Houston, L.A., Oakland and San Francisco. The brand partnered with Chef Jesse Vega of Sueños restaurant in Manhattan to create tequila-infused tacos, which allowed it to sample the spirit without actually serving it to consumers in a shot glass on the street. Consumers were kept up to date on stops via Facebook and Twitter (Rebel Industries, Los Angeles, handled).

Freschetta Simply… Inspired also turned to a food truck in October to create brand awareness for its frozen thin crust pizza among women ages 28 and older. It partnered with singer Natasha Bedingfield and traveled to her concert stops serving up slices of pizza to fans. A tent where brand ambassadors signed up consumers to its Facebook page using iPads was set up adjacent to the truck. The brand visited 20 concert venues and sampled 20,130 slices and received 2,122 mentions on social media sites and 8.5 million total impressions (Brand Connections, Montclair, NJ, handled).

“For our brand, I think the food truck will continue,” says Chris Leising, senior marketing director at Freschetta. “It’s a great opportunity to meet consumers in different places in their life and not necessarily just having our product in front of their eyes when they enter a retail store.”

Though these trucks organically lend themselves to food brands, all types of brands continue to find them an appealing marketing tool. “There are a lot of food trucks out there, but you might have thought that pop-ups would have died down because there are so many out there too, but they haven’t,” says Glass. “The reason they haven’t died down, and the reason why food trucks probably won’t either, is because it’s just another ‘vehicle’ to create any kind of experience out of it.”  EM