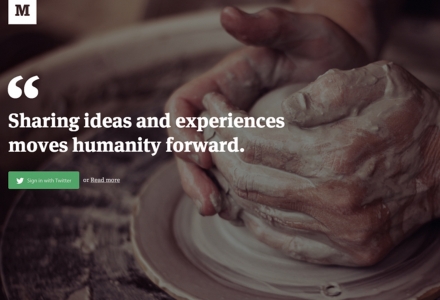 So, it’s the New Year and just because Facebook has more citizens than the United States and Twitter has more real-time journalism than television doesn’t mean that the innovators in the social space have given up. The last few months have been all a-rumble with new social platforms going into and out of beta, and we’ve been looking into some of the most exciting. Some will of course crash and burn (remember Google Wave?), but that doesn’t mean you shouldn’t take a look.

Sharetize: Show Me the Money   sharetize.com
Forget about all this influencer mumbo-jumbo. Sharetize says, put your mouth where your money is. It’s a content marketplace designed to facilitate pay-per-click for social media posts and articles. Basically, bloggers and influencers make bank (in the form of points which can be cashed in for cash and prizes) based on clicks. One hundred points is worth $1 in cash or $1.20 in gift cards or worth discounts at partner retailers. The question is: will consumers see this as selling out, or sending love? We’ll have to wait and see.

Vine: The Art of Gif-Giving   vine.co
Twitter owns this baby, and it just came out to widespread excitement. News organizations and tech folks are already trying out this platform that’s being called Instagram for video. It’s an Apple-only app (for now) that ties to Twitter, and lets you record six-second clips and post them directly to your Twitter feed. It taps into the microblogging that Twitter created, and brings it into the video era. Tinyvlogging is going to be a thing (we think). So get used to it.

Medium: Content for Connoisseurs   medium.com
Twitter founder Evan Williams is at it again, but this time he’s flipped the story. Where Twitter was all about the right now, Medium is all about the right way. It’s about high-quality writing in well-conceived posts by well-respected contributors. As Williams said on a Medium post, “Our goal is to help people pay attention to the most valuable stuff first and to have the best ideas win.” It’s in closed beta still, so most people who sign in with a Twitter handle can only read and only invited guests can post, but it is set to open to everyone eventually. We can’t wait for this one.

Branch: Solving Internet ADHD One Conversation at a Time   branch.com
Twitter’s tied in here, too. (We’re sensing a trend). Like Medium, you sign in via your Twitter account, and although not created by them, Evan Williams and Biz Stone are key investors. The idea behind Branch is to make online conversation work. Start a conversation. Keep focused. If the discussion gets off track, make a new “branch” and talk about the new topic on a side channel. They say it’s designed for publishers, particularly, but we see potential for any content creator (read: brand) who wants to engage with active and smart consumers.

Highlight: Social-Local-Mobile (please stop saying SoLoMo)   highlig.ht
This is a social app, available in the Apple app store and Google Play store and it’s all about sharing experiences with the people closest to us. Not in the metaphorical sense of closeness, but in the physical, geographical sense that a commemorative plate collector might be standing around the block just dying to trade his “Elvis on the Throne” for his neighbor’s “Queen Elizabeth takes a bath.” In short, if someone standing near a user also has the Highlight app, their profile will pop up on your phone, complete with name, photos, mutual friends and common interests. It runs in the background all the time, occasionally popping up with info about the world you’re walking through. Cool. And a little creepy.

Best of All Worlds: Snobbery at its Best  bestofallworlds.com
This is almost too good to be true. It’s a social platform for only the highest of income bracket members. And another member has to invite you to join. Finally, an online country club I can’t get into, either! But the members are certainly desirable consumers for many brands. If you figure out how to get access, let us know, ‘cause we gotta hear this.

Kumbuya: Join the Tribe. Cash in.   kumbuya.com
Want to target a specific interest-group of consumers? Kumbuya might be the spot for you. Start a “tribe” for your event, activation or brand and within your tribe, you can moderate and lead the discussion, and even make some money. Members can sell things to each other, with your permission, and when they do, you split the cash with Kumbuya.

Nextdoor: A Hyperlocal Place to Borrow Some Hedge Clippers   nextdoor.com
Nextdoor is a free social network for, you guessed it, individual neighborhoods. You have to prove you live there to get in. You also have to agree to drive the carpool once a week (editor’s note: statement not reviewed for accuracy). Designed to be the easiest way for neighbors—and their neighbors—to talk online and coordinate stuff in the real world.

Fancy: Do You Fancy some Direct Sales from Social Media?  thefancy.com
Fancy is kind of a cross between Pinterest, Amazon and Tumblr, where members discover new stuff all over the web, collect it all in a personal virtual catalogue and then buy it when ready, all from one fanciful platform (see what I did there?). What they want is for users to see something they like or covet and instead of going to Facebook to like it, simply Fancy it, so that later, they can decide to buy it. Lots of good ideas here.

Thumb: Be the Emperor. Or the Gladiator. Are you ­entertained?   thumb.it
A simple concept. Maybe too simple. Can’t make decisions for yourself? Then Thumb is right for you. Post a problem or question about something and your followers will either thumb it up or down, and you can live your life by majority rule. We kind of hope this doesn’t go anywhere. We’re sure it’ll be huge.

App.net: Pay to Play   app.net
This one’s interesting and pretty unique. App.net is an ad-free social network that isn’t free. Users have to pay monthly to get in the door and in exchange they get to have a social profile behind a pay wall. It’s been around for the best part of a year now and people are joining, against all odds, so keep a weather eye out for this one. They might have found something very interesting, after all.

Lua: Mission Control for Field Ops   getlua.com
This one is all about practical social interaction, primarily between people who work together on projects, or events or whatever. You can see the potential here. Have all of your field ops on one private network to coordinate your mobile tour or sports sponsorship. Everything from communications to troubleshooting to reporting is easily within reach. The catch: it ain’t free. Not sure if anyone will want to pay for a trendy, quicker version of email.