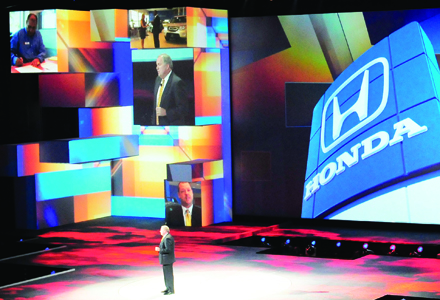 The Honda National Dealer Meeting, which took place last June at the Denver Convention Center, lifted the lid off Pandora’s box, but instead of unleashing the evils of mankind, it portrayed Honda’s view of the world, its technology and approach to the future. This Pandora’s Box is a 3D media server that had Honda engines and power trains, motorcycles and people movers flying through the air and landing on stage. In one segment, a virtual Honda CR-Z whirled through the center screen and onto the stage floor where a Honda vice president stepped out of a real CR-Z and welcomed everyone to the meeting. Another segment had a family zipping through various environments in a 3D Honda Odyssey minivan.

“3D normally is used for entertaining sight gags or tongue-in-cheek presentations, but here we decided to treat it as an integral part of the message of the meeting, particularly in the spirit of the times where the economy has taken a downturn and the automotive business has greatly diminished in terms of activity,” says Martin Brinkerhoff, president of the Irvine, CA-based Martin Brinkerhoff Associates, which produced the meeting.

3D technology helped bring that message—See What We See—to life. “Honda has survived very well, but the key message was how you look at the world, as an optimist or as a pessimist,” Brinkerhoff says. “Honda’s can-do spirit has a lot to do with its success, and that was the premise we started with as a launch pad for presenting its vision for the next year or two.”

Honda’s three-day dealer meetings typically start with a reception the first night and the second day begins with an opening session, followed by breakouts and seminars and an evening concert, this year by Brian Wilson of The Beach Boys fame. The meeting concludes after breakfast the third day.

At this year’s event, the See What We See theme began right from the start of the opening session, with visual paradoxes and puzzles on screen as more than 2,600 Honda dealers, their spouses and general managers filed in and waited for the meeting to begin. Those images transitioned into the opening module as an announcer invited the audience to view the world from Honda’s point of view. Attendees put on their 3D glasses as stereoscopic three-dimensional presentations of product and technology flew out of a center screen and landed on real dimensional scenery cubes flanking the screen.

In stereoscopic 3D, each eye sees a different image, which is what happens when moviegoers watch 3D cinema, as opposed to 3D graphics that are shown on a two-dimensional screen. To produce the Honda national dealer meeting, MBA utilized Coolux Media Systems’ Pandora’s Box media server. “It’s a very flexible media that allowed us while programming, on the day of the show or five seconds before, even during live shows sometimes, to take layers of elements and put them at different depths, almost as if composing it with PhotoShop or something,” Brinkerhoff says.

Let’s say Honda wanted to have a jet fly out over the audience, turn around and fly back into the distance. “We created one jet and using this box we could move it farther out or farther upstage,” Brinkerhoff says. “It gives you dynamic control of the dimensional objects, and that is very powerful.”

Months prior to the show Brinkerhoff and his technical director, Loke Wadhwani, built a complete one-third scale model of the actual set at MBA’s Irvine, CA-studio where they tested and fine-tuned the projection and computer-mapping. On-site at the Wells Fargo theater inside the convention center, crews loaded in and carpenters built the 100-foot-wide, 30-foot tall set and a crew of about 100 kept their eyes on the screen, looking for any glitches or signs of problems. Thankfully, there were none, but just in case, Brinkerhoff had taken extra precautions. In addition to the main computer system driving the show, a second system, which was a replica of the first one, served as the first back-up, and for the first time ever, he had a third back-up system as well.

3D was integrated throughout the session but it wasn’t overdone. “The idea was to balance it seriously with the message and not use it as an entertaining gag,” Brinkerhoff says. The one exception was a rock-and-roll video that played as the audience walked out.

“Honda had big things to share with our dealers for 2010, including the all-new CR-Z sport hybrid coupe and the completely redesigned Odyssey minivan,” says Steve Center, vp-marketing operations at American Honda Motor Co. “We wanted the dealers to really feel our excitement, so we chose to kick things off with 3D to really infuse a feeling of energy and innovation, and it worked!”

All this technology didn’t even cost Honda an arm and a leg. In fact, Brinkerhoff says this meeting cost less than the previous years. Now, that’s a great message in any dimension.   EM