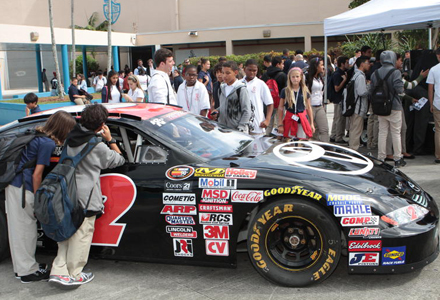 As part of a strategy to grow its audience and engage with youth, NASCAR on November 16 brought 2,300 Dade County middle school students and teachers to Homestead Miami Speedway for a first-hand look at science, technology, engineering and math (a group of study topics collectively know as “STEM”)—all with a racing spin. The field trip is the culmination of a three-part program involving hands-on and in-person activities designed by Ten80 Education, a team of scientists, teachers, professors and parents to help students understand STEM subjects. NASCAR is a sponsor of the program.

“We want to grow our fan base as well as help the STEM initiative nationwide to create future engineers, scientists, technicians and mechanics, because that is what runs our sport,” Christine DeMichael, senior manager-consumer marketing at NASCAR, told Buzz. “NASCAR is one of the few sports that can work in the physics space in the classroom because aerodynamics, traction, friction and kinetic energy are integral to racing.”

NASCAR activated a smaller version of the program last year at South Beach with Boys and Girls Clubs and other students. This year, Youth Fest began in late September with a video pen-pal program in which rookie drivers from the K&N Series interacted with an individual grade from one or two schools. Once a week, the drivers submitted video content about their NASCAR experience, inside information about being a driver and thoughts about their upcoming race. NASCAR provided relevant STEM questions and/or trivia that the driver could include at the end of the video. In addition, the classrooms received a welcome kit prior to the first week that included an overview of the program, the history of NASCAR and a bio of the driver pen-pal. From Nov. 7 to 13, NASCAR, its educational partners and drivers, if available, visited participating schools and conducted 90-minute interactive seminars.

At the race track, students saw the Truck Series practicing on the track and visited exhibits on the Midway from NASCAR sponsors such as Ford, Sprint and Goodyear. They got to drive cars virtually using simulators and see how Goodyear makes tires designed for different track surfaces.