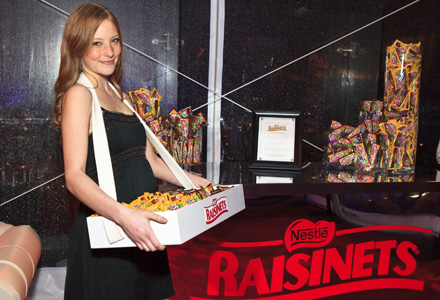 Raisinets Were the Stars at OK! Magazine Oscar Party

OK! Magazine on Feb. 25 threw a pre-Oscar party with a British theme that promoted Raisinets as a healthy treat for the celebrities, influencers and VIPs in attendance.

The event, held at the London Hotel in Los Angeles, featured a branded Raisinets lounge that was decked out as a luxury screening room complete with leather sofas and five plasma screens that showed nominated films. A Raisinets bar served as a sampling hub while models with custom-branded Raisinet trays walked the room and distributed the chocolate-covered raisin treats. The subtle but branded integration presented the brand as a healthy snack because of its antioxidant and natural ingredients and aligned it with the movies in an upscale way.

“Raisinets was interested in aligning with the movies and we are a magazine about entertainment,” Vildia Samaniego, associate publisher at OK!, told Buzz. “We cover the Oscars and film in the magazine, so it all came together at the party.” Agency: Precision Event Group, Los Angeles.