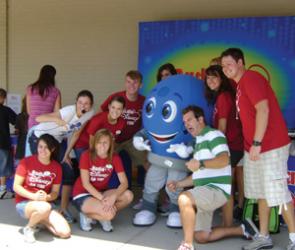 Brand mascots have inhabited advertising since the dawn of time. Ask any self-respecting baby boomer about Charlie the Tuna, Tony the Tiger or the Pillsbury Doughboy, and chances are he or she still recalls the ads that starred these icons. Not all were cartoon characters, either. Madge the Manicurist touted the magical qualities of Palmolive dish detergent (“You’re soaking in it!”) for 26 years. And remember the Dunkin’ Donut man and Charmin’s Mr. Whipple? Cartoons and fictional characters like these personify a brand, giving it a voice and a point of differentiation in a cluttered ad landscape. Today, the idea with retro roots is breathing new life into modern-day event programs.

Kmart’s Mr. Bluelight has been a shining success since his launch in spring 2007 when the animated blue lightbulb first appeared in ads for the retailer. With ties to the retailer’s blue-light specials, those hour-long sales that Kmart staged periodically from 1965- 1990 and announced via a flashing blue bulb, the upbeat and playful Mr. Bluelight now appears at employee events and rallies as well as in-store events and grand re-openings where he shakes hands, hugs shoppers and poses for photos. He was on hand for the retailer’s 50th anniversary celebration in Puerto Rico and accompanied Kmart cmo Mark Snyder to ring the opening and closing bells at NASDAQ on Black Friday (Agencies: Legacy Marketing Partners, Chicago; Marketing Drive, Norwalk, CT).

“He can shine his light to really special deals and offers and he did that this holiday season with Mr. Bluelight’s Christmas Countdown, but he is also much more,” says Terry Brophey, vpintegrated marketing communications at Kmart. “His strategic intent is to be a brand builder and the persona of the Kmart brand which is All-American, family-focused, authentic, approachable and we don’t take ourselves too seriously. He’s got the same set of values and character and is a way to differentiate Kmart from other mass retailers.”

A very different character, The Most Interesting Man in the World, achieves similar results for Dos Equis, which was looking to break through to 21- to 34- year-old males. “The beer category is a lot like a trendy, hip bar—crowded, noisy and chaotic,” says Paul Smailes, Dos Equis brand director at Heineken USA. “Our challenge became clear: Don’t just shout like everybody else. Help him achieve a goal, to be seen as interesting and to have social currency.”

The Most Interesting Show in 2008 traveled to 14 cities and reached 15,000 consumers, with more than 40,000 bottles sampled and more than 99 million media impressions generated. MIM’s Facebook page has more than 120,000 fans. Consumers who complete courses at the Academy can become eligible for an Academy apprenticeship and perhaps even become Dos Equis ambassadors themselves.

New Belgium Brewing Co. in February unleashed a team of Beer Rangers clad in tan and olive uniforms who will appear in bars and retail outlets as well as in print ads and online games to introduce a new brew called Ranger IPA. Their mission: “To Protect. To Pour. To Partake.” Their get-up: Wide-brimmed hat, red kerchief, olive shirt and pants and tan gaiters (Agency: Cultivator Advertising & Design, Denver).

The beer rangers are conscripted from the ranks of New Belgium’s 86 male and female sales reps. They will participate in on-premise events and promos, beer dinners where they will pair up with a chef and cook with the beers, and Tour de Fat, an 11-city bike event sponsored by the brand. Additional “honorary” Rangers will be deputized at bar events by putting their head through a cut-out hole in a life-size Beer Ranger canvas for a souvenir photo.

An online component at newbelgium.com/rangerland includes a Ranger trio hip-hop video, an invitation to friend New Belgium on Facebook and a cut-and-paste “Ranger Yourself” function in which your headshot appears on a Ranger body. “We started calling our sales folks ‘rangers’ back in 1995, but they never really had any physical trappings,” says Bryan Simpson, director-p.r. at New Belgium. “We’ve given them a look and feel this time. It’s been a long time coming. They are pretty much the face in their market.”

As Tony would say, “They’re grrreat!”EM