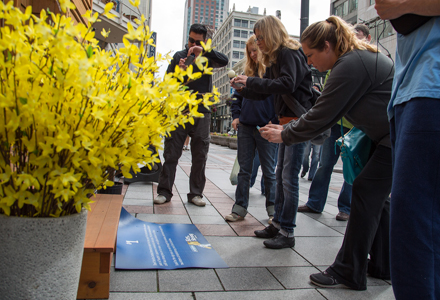 Schlage, the lock brand, on June 27 ended a five-day digital and physical scavenger hunt that involved locking a man in a tiny house in downtown Seattle and having people solve clues to find the key to unlock him. The effort, called “Key to Strong Challenge,” was part of an integrated campaign that included broadcast, digital and social as well as experiential elements.

The challenge began on June 23 when Seattle resident Joshua Paul Downs was locked inside a 174-square-foot house in the Westlake Center Plaza. A mixed-media challenge sent people to “strong” locations, which tied in with the brand’s identity as a “strong” security lock, to find clues to complete the challenge. They looked for “strong” tea or, the last clue, a “strong” man who held the key to unlock the house in his pocket.

The first clue was released at the Schlage house; subsequent clues appeared daily on keytostrong.com and were tweeted by Joshua via @lockedinahouse. Throughout the challenge, participants could use Joshua as a resource via phone, text or tweet. The first to find all the clues and unlock Joshua from the house received a $5,000 grand prize. Five first place and five, second place prizes were also awarded.

“Seattle is condensed and has a lot of foot traffic,” Ann Matheis, brand director at Schlage, told Buzz. “We felt a scavenger hunt would be easy for people who work downtown and engage them with a brand they don’t think about every day.” Agency: Young & Laramore, Indianapolis.