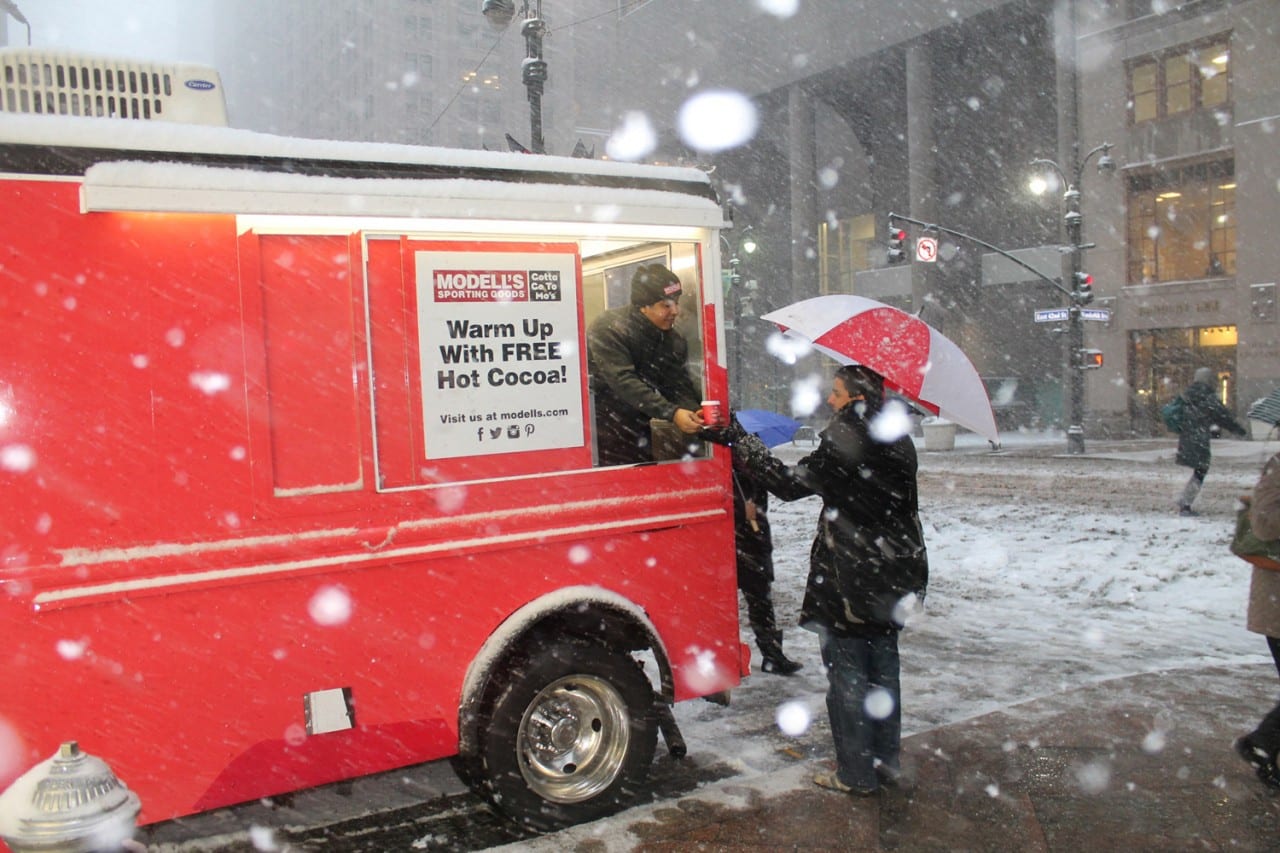 How the Weather Forecast Inspired Modell’s

How often as marketers do you wake up in the morning and think—let’s treat our consumers to something special today?

It’s precisely what Modell’s Sporting Goods did on Feb. 12, when the 125-year-old retailer took to the streets of New York City during a snowstorm to hand out free hot chocolate and hand warmers. Modell’s made the decision on the fly, based on the weather forecast, and it demonstrated how impactful it can be to seize the moment, and let your actions speak louder than words.

The idea didn’t come together that morning. During the Super Bowl Boulevard activation in February, Modell’s had passed out hot chocolate to fans in town for the festivities. (Organizers were concerned those visiting wouldn’t be prepared for the Polar Vortex.) The program wrapped nicely, and the truck went back to whatever facility it came from. But, in the middle of the next week, New York City faced yet another major snowstorm. A few phone calls later, to the vendor and to brand ambassadors on-call, and that handy red truck was back in action within 24 hours with a little signage attached, targeting high-traffic locations across the city as the snow came down. (The Super Bowl wrap had been removed, but the truck happened to be red, which is Modell’s color.)

“It was something that we did because we felt like it was the right thing to do at the time, and we weren’t expecting anything,” says Lynn LaRocca, svp-marketing at Modell’s. “We weren’t doing anything to drive traffic into the stores or increase traffic, for us it was just a pure brand play, but we know that the more we can connect with consumers on a one-to-one basis, we’ll end up being top of mind when it comes to ‘Where do I need to go for my sporting goods needs.’” Agency: Allied Experiential, New York City.

What Made it a Hit:

It earned a ton of great press. In one instance, Derek Hough from “Dancing with the Stars” was photographed grabbing a cup and his picture generated social buzz online. Among other T.V. coverage, “Today” show anchor Al Roker, reporting from Sochi, Russia for the Olympics, cited the stunt in his broadcast.

It was altruistic, but still strategic. The team watched local newscasts and guided the driver to locations where news crews were set up. Given the fact newscasters are often stretching for coverage during their ongoing live storm coverage, it made sense to cozy on up to them—and give them hot chocolate, of course.

It could be nimble and opportunistic. The stunt didn’t require any special permitting. As long as the truck occupied a parking space, it was all groovy. But, signage, materials and things could not be out on the street or sidewalk surrounding it.