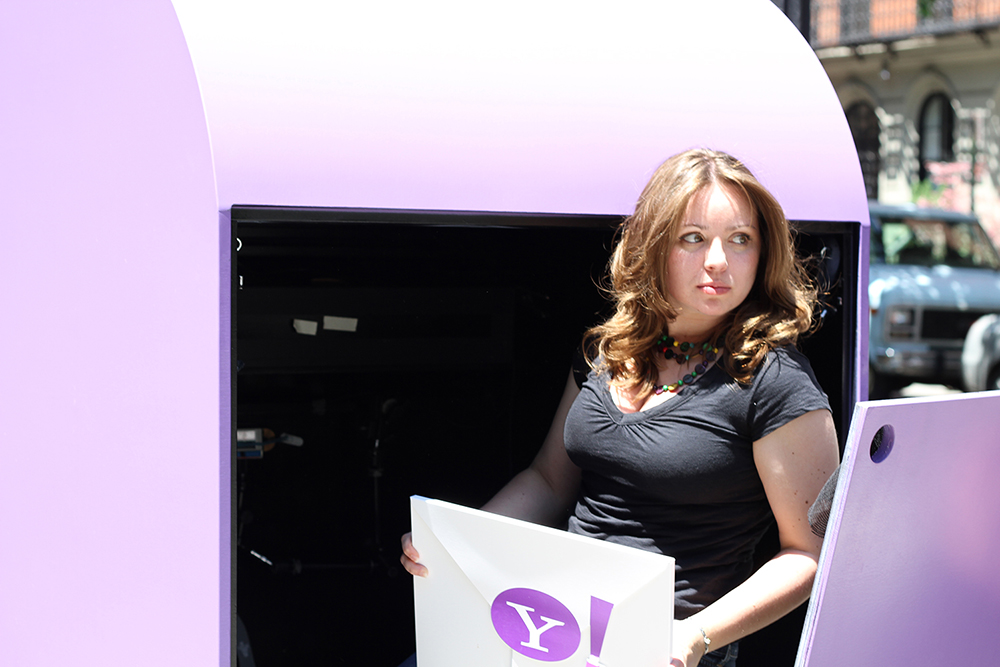 Maintaining An Air of Mystery from Inside a Giant Mailbox

Has a mailbox ever talked to you before? This summer, a giant purple talking Yahoo! mailbox struck up conversations with passersby on 9th Street and 8th Avenue in Park Slope, Brooklyn, on June 2, and on Stuyvesant Street, in Manhattan, on June 3. I was embedded during the latter, hidden in a surveillance van with the Yahoo! experiential team and New York City-based handling agency e2 Marketing, and watching on monitors as consumers were captured talking to the mailbox on a camera planted inside.

The stunt promoted the brand’s updated version of Yahoo! Mail, a service meant to connect users in a more personal way through enhanced features like photo sharing and improved spam protection. The talking mailbox was “staffed” by comedian Ryan McDonough, who joked with consumers and kept them around to say and do all sorts of crazy things. He was inside a second surveillance van parked nearby where he watched people’s reactions on a monitor, and then the brand and agency team prompted a staffer inside the box to push out oversized white and purple branded envelopes with a gift inside, while the comedian announced “I have a special Yahoo! Mail delivery for you.”

Giveaway items were matched to each person’s interests and included iPads, Yankee tickets, Starbucks cards and doggy treats. When the staffer inside the mailbox needed a break (it was hot in there), I stepped in. Inside, there were envelopes organized by sections with different color post-it notes on them (yellow, for example, was for consumers with dogs), which helped to keep the process seamless. The crew gave me a pep talk and equipped me with an ear and mouthpiece to communicate with the teams inside the surveillance vans.

I took a moment to study the post-its and get comfortable with the camera set up inside the mailbox that served as the window to the sidewalk, and then I was ready. The crew latched up the mailbox door and it was show time! Consumers gathered around the mailbox as McDonough lured them over with his witty reparte. Then I was prompted to spit out a giant envelope without anyone seeing my hand. “The mailbox has a hand,” a consumer indignantly yelled. I quickly pulled back my hand and kept the slot tightly shut as the crowd tried to peek inside it. Close call!

Needless to say, I was glad when my brief shift was over. The crew seemed glad, too. Some things are best left up to the pros. Here are three more lessons learned while trying to keep the mystery alive from inside a street program heavy on the element of surprise:

Be quick on your feet. When one consumer tested the mailbox by asking for the local post office’s address, the crew did a rapid search, informed the comedian and he quickly answered the man. He walked away impressed.

Hold back the good stuff. Yahoo! and e2 decided to leave the big-ticket items, like iPads and iPods for later in the day. This prevented them from getting the word out too early, which would have diluted the stunt’s authenticity. Once folks got wind of the iPads they rushed over to purposely engage with the mailbox to get the big gift. But the crew was on to imposters and usually handed them a giant lollipop instead. Sweet!

Get the necessary permits. Because the crew was monitoring and instructing from across the street, it was critical to have a clear view of the mailbox. They obtained parking permits so that people wouldn’t block their view by parking their vehicles in front of the mailbox.