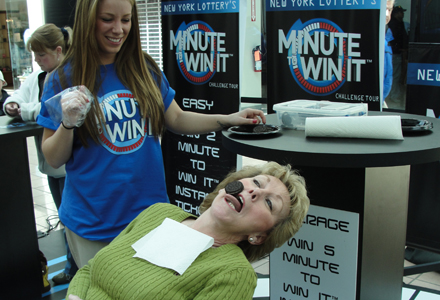 To promote the new $5 scratch-off game, Minute to Win It, the New York Lottery teamed up with NBC Universal’s game show of the same name for a mobile tour that has turned out to be in the top five most successful new ticket launches in the history of the state’s lottery, according to post-tour metrics.

The 28-stop Minute to Win It Challenge tour wrapped last week after travelling to malls and casinos across New York State since the end of January. The tour challenged consumers with a variety of games that were based on the television show. To take part, players had to present one of the new scratch-off tickets. The games could be played at three difficulty levels— easy, moderate and hard—and based on the difficulty of the game, contestants could win two, five or 10 Minute to Win It tickets, each offering a chance to win up to $1 million. The games came straight out of the NBC show and included challenges like Face the Cookie, which challenges contestants to move cookies from their forehead to their mouth using only their face, and ThisBlows, where a player must continually blow up a balloon and expel the air from it to knock cups off of a table. The tour also included local celebrities and Lottery Draw Team members at key tour stops.

“This tour developed great excitement for the new game that continued throughout its run,” Carolyn Hapeman, spokeswoman for the New York Lottery, told Buzz. “The tie-in with the television show made sense and helped create the kind of fun experience we wanted.” Agencies: DDB, New York City; Pro Motion, St. Louis.