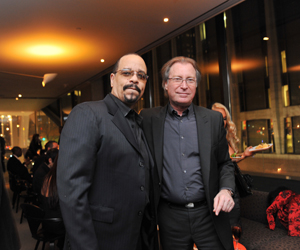 New York City has been the scene of hundreds of Academy Award-winning films since the awards’ inception. To celebrate and recognize that fact, last weekend the city hosted its first official Oscar Night & The City viewing party at Avery Fisher Hall.

The party was the culmination of a weeklong celebration of the city’s contribution to film that included a movie marathon of Oscar-winning New York-centric films and special tours of New York film locations. The campaign was sponsored by AMC, Starwood Hotels and On Location Tours. More than 700 guests and residents of the city bought tickets to walk the red carpet, sip champagne and cocktails and enjoy the award show late into the night on Sunday. Some of New York’s many resident stars were also on hand for the event, including “Law and Order’s” Richard Belzer and Ice-T and comedian David Alan Grier. For weeks prior, movie buffs enjoyed NYC Oscar-worthy quotes on posters around the city with lines like “Leave the gun. Take the cannoli” from “The Godfather” and many others. The event was a fundraiser for the New York City and Company foundation, which supports the arts in New York.

“New York City stories have contributed greatly to the Oscars over the years and many filmmakers reside here. It’s very meaningful to us to bring all our creative, marketing and partnership resources into play to celebrate the Oscars,” Karen Sortito, svp-entertainment at NYC & Company, the city’s official marketing arm, told Buzz. “This is a great brand association with one of the best brands in the world and it helps us remind New Yorkers about how vibrant the city is, which is a perpetual goal for us.” (Photo Credit: Julienne Schaer, courtesy of NYC & Company.)