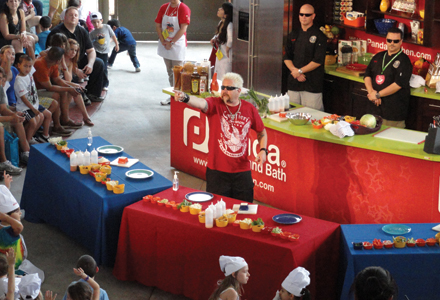 Kelloggs Invites Kids Into The Kitchen

Though the Kellogg’s Kidz Kitchen has been going strong for six years as part of The Food Network South Beach Wine & Food Festival’s Fun and Fit as a Family event, the recent news that the cable network will launch a food magazine for kids proves that Kellogg’s was onto something all along.

Kellogg’s says it does intend to grow the program, but for now is concentrating on accommodating the rapidly increasing number of families that visit the Miami Kidz Kitchen each February, which always sells out at $20 a person and fills to capacity (Eventive Marketing, New York City, handles). “It’s a positive event and we enjoy doing it,” says Meigan Goodwin, senior manager-shopper marketing at Kellogg’s. “We see a lot of potential going forward in these types of events.”

What has made Kellogg’s recipe for Kidz Kitchen such a success over the years? Probably the same qualities that are found in talented chefs: passion, patience and vision.

When Whole Foods replaced Publix as the grocery store sponsor of the Grand Tasting Village, it seemed like the shopper marketing initiative known as Kellogg’s Kidz Kitchen might cease to exist. But as luck would have it, the festival moved the Fun and Fit as a Family event to a nearby but separate area called Jungle Island. That’s when Kellogg’s brought back Publix and took over the Serpentarium inside Jungle Island, which can house 2,000 people.

For two days in February, families are welcomed into a large kitchen demo area (20 feet high and 30 feet deep) decorated with Kellogg’s branding and lively music. The brand gives the kids chefs’ hats and aprons and sends out a warm-up act, like an animal handler for example, followed by Tony the Tiger escorting that time slot’s celebrity chef to the stage. Three chefs perform for an hour each, every day, but some favorites, like Guy Fieri, have been known to go on for two hours. The event changes depending on the chef; some have kids come up and cook with them while others stick to a Q&A format. The chefs are not required to cook with Kellogg’s products or to plug them into their act, but they’re encouraged to do so. This year, chef Robert Irvine of “Restaurant Impossible” picked up a box of Corn Flakes and said that he got his big muscles by eating two boxes of the cereal a day when he was growing up. Fieri usually trumps though, having created a house out of Pop-Tarts one time or subjecting himself to being dunked inside a tank filled with milky water and Fruit Loops cereal another.

The Give and Take

Though it may be tricky to make the association between a wine and food festival and a kid-friendly event, Goodwin says that activations like Kidz Kitchen are making these festivals more of a family event now. However, she admits that it’s sometimes difficult with Kidz Kitchen being offsite to determine if they’re getting as many people as they could. But then again, she says, the separation works for this event because the activations on the beach cater more to adults while Jungle Island really lends itself to kids. “One of the challenges is how do you make it seem like one but still have it separate,” she says. “We try to do a good job of incorporating it on the website and making it an event that is part of the South Beach Fest, but just at a different location.”

The Drive to Retail

Kellogg’s Kidz Kitchen’s objectives are twofold. One: build a relationship with families by providing exclusive entertainment and cooking tips. Two: drive purchase at Publix supermarkets in South Florida. “We want shoppers to go to Publix and understand that connection, so we had in-store elements this year, such as a QR code that sent people to a branded website to get $5 off their event ticket when they scanned it with their smartphones,” says Goodwin. “We’re driving people from Publix to the event and getting that interaction. If we can build this relationship with families and involve kids we’ll also develop that relationship to our brands.”

Quality interaction is key to engaging kids at a food event. Having the kids actually cook is extremely popular at Kidz Kitchen. That’s probably the best way to engage the kids, says Goodwin. The challenge is that some people will inevitably get left out. Some chefs prefer Q&A, so Kellogg’s has staff with microphones go around the room to give kids and the chefs a chance to have a conversation. Another challenge is making sure that the chefs remember their audience. “When they talk about certain cooking terms, they might need to explain it,” she says. “They can provide tips on how kids can help in the kitchen, but if they’re too young to handle a knife, it’s a different approach. So it’s about finding a way to talk to all the different age groups, so that they keep everyone involved.”

It’s going to continue to grow. “We’re busting at the seams (more than 6,000 people a day go through Kidz Kitchen),” says Goodwin.  “We almost have to limit how many people can come in now. I don’t think we realized the potential.”  Most of the families that currently attend are from Florida, but Goodwin sees it becoming a destination for families from all over. But for that, says Goodwin, we may need a bigger venue.