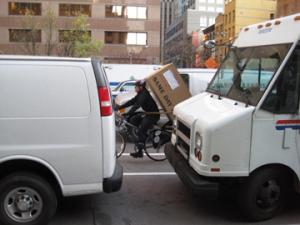 For the first week in December New York City pedestrians were stopped in their tracks and traffic came to a halt as three bike messengers hired by J&R Music and Computer World sporting refrigerator-sized boxes strapped to their backs pedaled throughout the city as if making deliveries. The stunt was part of J&R’s promotion for its same-day delivery service, which also included the creation of Chinese-style take out menus (as ubiquitous in the Big Apple as the harried bike messengers) handed out by a second street team and delivered to apartments, business lobbies and public areas.

“Our target was people who live or work in midtown or uptown, so we thought this was a fun way outside of a traditional strategy,” Jason Friedman, executive vp at J&R, told Buzz. “And the messengers are known in New York City as being obnoxious bicyclists, so we thought, ‘Let’s play off that and make them ultra obnoxious with these massive refrigerator boxes on their backs.’”

Though the refrigerator boxes appeared to be strapped to the messengers’ backs by a rope, the branded empty boxes were actually attached to a custom frame mounted on the bikes. A Twitter campaign was added to bolster buzz by urging anyone who spotted one of the messengers to take a picture and tweet it to @jrblog. People who submitted the first 10 pictures each day received a $10 J&R gift card. Agencies: Eventive Marketing, New York City; Toy, New York City.