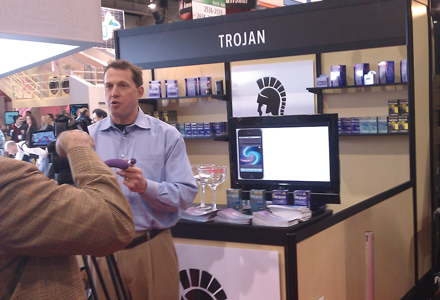 Tara Dunion, spokesperson for the Consumer Electronics Association, explains: “At the world’s largest consumer technology trade show, what you are seeing is technology that is impacting us in so many ways. Be it health, fitness, mobile computing, or technology in the car and content on the go, technology is more prevalent in our lives. CES is known to be where innovative products are.”

And that would include Trojan, where executives made a strategic decision a few years back to invest millions of dollars in developing sexual health innovations in its two platforms, condoms and vibrators, with the objective of increasing pleasure and usage rates. “We were looking for an opportunity or a venue to share those innovations where they would get lots of attention,” says Jim Daniels, cmo at Trojan. “CES was a no-brainer. It is where consumer companies bring new technologies that make peoples’ lives better or more entertaining. We thought, well, that’s what our products do. They protect people from disease and pregnancy and some of the innovations we are putting on condoms and especially our vibrators bring pleasure.”

Daniels says he wasn’t sure how it would go, but the media and consumer attention and legitimate interest in the innovation, he says, “blew us away.”
Compared to the glitz and glamour of the high-tech booths on the show floor, Trojan’s booth in the Digital Health area was rather modest, with tables and a video loop showing its innovations and advertising. Product displays on shelves lined the back wall. Blowups of the condoms showcased the different forms and shapes; clear-skinned vibrators revealed their inner workings.

The product and the topic drew people in, as well as attractive female brand ambassadors, or “technical assistants” as the company called them, wearing glasses and lab coats who distributed samples of the new BareSkin and Ecstasy Fire & Ice condoms and nifty 2GO condom cards. There were also random drawings to win vibrators.

QR codes on the tech assistants’ jackets and neck lanyards added a high-tech touch. Attendees who snapped the codes on their cell phones received instant information about the brand and how to connect with it on digital platforms such as its website and Facebook.

“At CES, people are looking for ways to add innovation in their lives to make it better, whether that is how you want to game, how you want to communicate, what car you want to drive. The level of sexual pleasure and fulfillment you want to pursue clicked with people,” Daniels says. “It was a good fit.”

At Reese’s, on the other hand, it was all about size, which apparently does matter. After spending years developing the perfect combination of peanut butter and chocolate in miniaturized form without the paper cup that comes in the traditional two-cup package, Reese’s saw CES as the perfect platform to launch its Minis. The candies, which Reese’s calls the “Next Big, Little Thing,” are about the size of a dime and come in a resealable, standup pouch.

“As technology gets smaller and smaller, everything from chips to MP3 players to cell phones, so does our candy,” says Anna Lingeris, p.r. and brand communications manager at The Hershey Company, which owns the Reese’s brand. “We thought CES offered a great audience, a variety of media and with the tie-in to technology and size, we thought let’s go for it.”

Taking a page from some of the top Silicon Valley product launches, Reese’s set up a 10-foot by 20-foot orange Reese’s box and a countdown to a big unveiling in the Grand Lobby at noon on Jan. 6, the first day of the show. Tech personality and internet entrepreneur Chris Pirillo of Lockergnome and Jim St. John, vp-research and development at Hershey’s, opened the box to reveal one teeny tiny Mini, which appeared in the spotlight on a glass pedestal to showcase the size. Tall male models also helped play up the size theme.

To build buzz prior to the show, Reese’s worked with a handful of tech influencers to create teaser videos to drive visibility for the launch. The videos spoofed the “unboxing” trend in the tech world, but didn’t reveal the product.

The company also partnered with Intel to release a photo on Jan. 6 that compared the new second generation Intel Core processor with the new Reese’s Minis and a dime.  EM