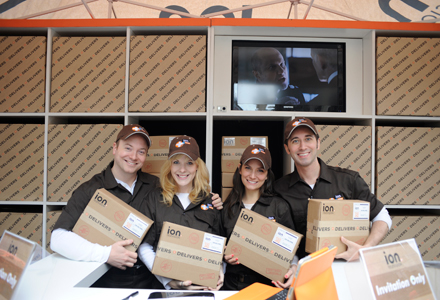 As part of a strategy to reinforce its “ION Delivers” campaign, the network erected a pop-up mobile mailroom during TV’s Upfront Week 2012 on the streets of New York City outside of advertising agency offices.

The effort (April 30-May 4 and May 7-11) reinforced the premise that ION delivers on four points—quality programming, performance (referring to its double-digit growth for the past three years), viewer engagement and consumers who watch its shows and spend money with advertisers. The campaign was designed to encourage buyers to spend money with the network and drive traffic to its website, iondelivers.com, for additional information.

Prior to the activation, media buyers received a mock ION shipping notice alerting them as to where and when they could pick up their package. The mailroom was situated on the street in front of each agency, making the delivery as convenient and seamless as possible for buyers.

Upon arrival, the buyers received a cold ION-branded bottle of water, interacted with the iondelivers.com site via iPads, then exchanged their shipping notice for a box of branded desktop items including a mouse pad, calendar, tape dispenser, highlighter and journal. An on-site contest challenged attendees to guess the number of orange (a tie to the brand’s logo) packing peanuts for the chance to win a Kindle Fire.

“The mobile mailroom was a fun complement to the campaign,” Chris Addeo, vp- marketing at ION, told Buzz. “We have found the one-on-one experience with buyers at key agencies is effective and gives our sales people a chance to interact during a time when the buyers are very busy. It gives them something that reminds them of ION when they are making recommendations to their clients.” Agency: The Michael Alan Group, New York City