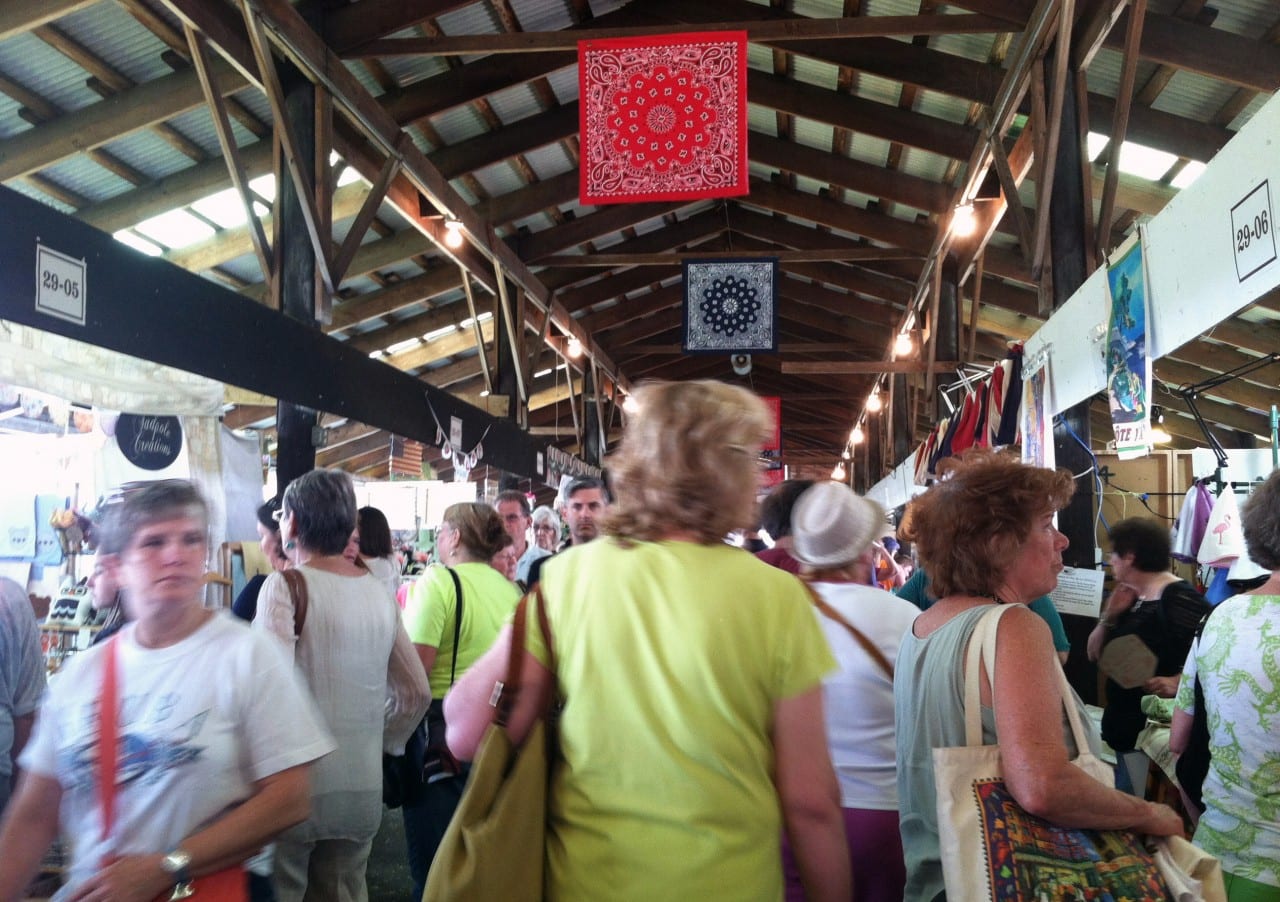 In researching Country Living’s event program, the Country Living Fair, I came across a scroll of exuberant commenters on the magazine’s event page, one of whom declared: “This fair is on my bucket list.” Whoa, really? Pulling into the Dutchess County Fairgrounds June 7 in Rhinebeck, NY, I witnessed the power behind that statement as flocks of hard-core female fairgoers emerged from vehicles all around me, many armed with backpacks, totes and pull carts to haul the day’s finds.

According to Christine Gerstein, associate publisher-marketing at Hearst’s Country Living, Woman’s Day and Good Housekeeping magazines, this is one of the keys to creating events that appeal to women: giving them opportunities to connect. Bloggers write about taking their moms, their sisters and aunts along for a day of shopping and demos. They meet the artisans and other attendees as well. This year the fair circuit, which launched in 2006, is estimated to attract 65,000 attendees across its three events (the event is going to Columbus, OH, in September and Atlanta in October). That’s a lot of possible connections.

“It has to have authenticity to it,” Gerstein says. “There has to be a takeaway at the end of the event. It isn’t just about entertainment anymore.”

In addition to the more than 200 vendors of antiques, gifts, home décor and jewelry, the Country Living Fair offers educational experiences from seminars on everything from making a do-it-yourself chandelier to blending an authentic egg cream. A live string band played throughout the day, and the food court was expansive. Secluded shaded benches scattered the grounds. Maybe it was the vintage denim and accessories dealers, or the local vodka sampling, but we saw a hip, fresh personality behind Country Living come out, too. The fair’s offerings give a woman just enough leverage to make the day (or weekend) into the experience of her choosing—with whomever she chooses. Hubbies and boyfriends, included.

And much like its sister publication Good Housekeeping’s two-year-old Spring Fling showcase, the Fair provides sponsors and advertisers a platform to engage. Here, a look at the top sponsor activations at the event. (For more photos, check out our gallery.) 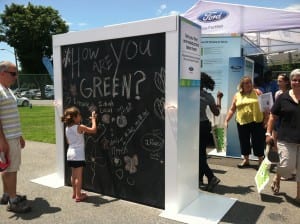 Women want takeaways and Ford delivered—a $10 Visa gift card in exchange for participating in a ride or test drive. Cha-ching. Ford’s activation took place at the back of the food court, which led directly to a side parking lot. We felt the location strategically allowed groups to conveniently split for a bit—why don’t I do the test drive while you finish eating or plotting the afternoon?

A large blackboard with chalk prompted consumers to write answers to the question “How Are You Green?” Next, a GIF booth took four pictures in a row of attendees striking different poses, and then Ford emailed the animated file.

Registration took place at one of three tablet stations where consumers offered up information like address, email and phone number, and then preferences about cars—what I’m driving now, what I might want my next car to be. While waiting for their turn, consumers checked out displays talking about Ford’s overall green initiatives and the four vehicle choices to test out: the eco-boost, plug-in hybrid, the hybrid and the all-electric. The brand also promoted its MyFord mobile app, which plots nearby charging stations, tracks CO2 emissions savings, checks existing charge and range and creates efficient routes.

After a less than five-minute wait, a brand ambassador escorted the tester to the car (they were sporting fabulous bamboo name tags, if I might add) and talked about its features, what might be the best model for her lifestyle and what features she might be looking for in her next vehicle. We thought the brand ambassadors held an impressive amount of knowledge and an overall calm, cool and friendly demeanor; no “sales pitch” involved.

With the test drive complete, consumers checked out at a stand where a staffer activated the $10 gift card and handed over a small tote made of recycled materials with Ford and Country Living branding on it. It took about 20 minutes from start to finish, but the Ford interactions didn’t stop there. The brand positioned itself at the exit and offered attendees free rides to their car in an all-electric vehicle. VIP, baby. 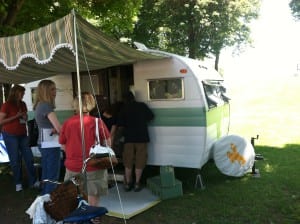 Go RVing carved out some nice real estate along the first drag of the fairgrounds, right beyond the entrance gate. The brand partnered with Sisters on the Fly, women who travel the country in customized vintage RV trailers “promoting empowerment through sisterhood through outdoor adventures.” Attendees could chat with one of four “sisters” who were on-site and explore their trailers. The owners spoke about their travels on the event’s main stage during the weekend. Go RVing also brought a gigantic modern RV on-site to explore, too, and offered a sweepstakes for a vacation prize package. The best of both worlds, we thought. 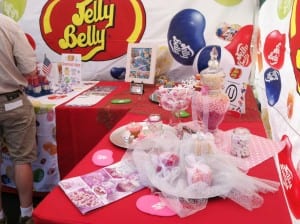 Jelly Belly had your standard pop-up tent, but its colorful graphics displays—and food displays—really made it pop. Two brand ambassadors manned a host stand and passed out free samples. Under the tent, another brand ambassador showed off different desserts made using the candy to sweeten it all up, along with the recipes and instructions. Our favorite: A set of decorative display bottles containing red, white and blue jellybeans for the (then) upcoming Fourth of July holiday. Signage within the footprint also promoted the brand’s mobile app. 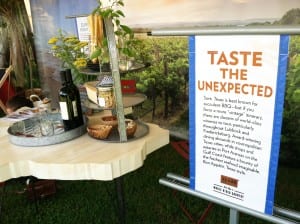 This activation got our attention with all the quality design elements used to bring four Texas themes to life: outdoor adventure, beach, food and entertainment for kids. Each station had a giant photographic backdrop and display that reflected the subject matter. For “Taste the Unexpected” there was a wooden table in the shape of the state with a spread of local foods and wine; information on where to find the best barbecue, wine tours, and shopping—“Bon Appétit, Texas-style,” a nylon banner read. The only problem: we didn’t run into any reps manning the activation. C’mon, represent!

A WOMAN’S TOUCH: The day at the Country Living Fair came with plenty of small and large indulgences—the kinds of details that appeal to women. These included:

You could buy a purse, or you could buy a dresser at this fair. So, the magazine included a bag check and an on-site shipping service to keep the day from dragging… and from you dragging bags around.

Country Living pushed a $9.99 year subscription deal at the fair and did so at multiple subscriptions stands located all over the fairgrounds. A fair deal, and a perfect small indulgence or gift.

There were 22(!) food vendors to choose from in the food court, eight of whom offered an exclusive Country Living recipe on their menu. And, many were local.

Sandra O’Loughlin contributed to this report