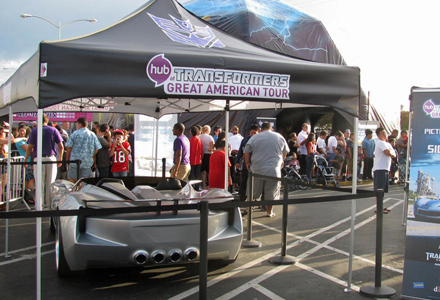 The Hub excites ‘Transformers’ fans with a ‘Great American Tour’

To drive awareness for its all-new computer generated animated TV series “Transformers Prime,” The Hub network partnered with Hasbro, Blockbuster, Dish Network, Paramount and Universal Studios Hollywood to design The Hub of Transformers: Great American Tour to coincide with the three-part season finale of the show on Oct. 1. It also promoted the “Transformers: Dark of the Moon” Blu-ray and DVD release on Sept. 30.   The East and West Coast four-week, eight-city tour, which wrapped on Oct. 22, set up at Blockbuster parking lots with six consumer activations that included the The Hub of Transformers Dome, a 50-foot inflatable dome with interactive displays; an area where consumers could step into the life-sized hand of the popular Transformers character Optimus Prime for a photo op; a Transformers, Dark of the Moon Car Display where fans posed next to the authentic Camaro (BUMBLEBEE) or Corvette (SIDESWIPE) vehicles; and the Wheel of Transformers Prize Wheel. Families could also sign up for an online sweepstakes to be among the first to experience Transformers: The Ride–3D coming to Universal Studios Hollywood by “liking” Blockbuster on Facebook or at Hasbro, Hub, Paramount or Universal’s pages. Kids ages six to 16 could also enter to win a ride to school in BUMBLEBEE at transformersprimestyle.com.

“Our primary objective was to showcase the original animated series ‘Transformers Prime’ that can only be seen on The Hub, along with the original animated series that started it all, ‘Transformers Generation 1,’” Greg Heanue, vp-marketing at The Hub, told Buzz. “It was important for the tour to communicate all of the new offerings in a way that didn’t compete with or dilute the entertainment value of each other.”   To drive families in-store, Blockbuster offered a photo op that put fans in a picture with four Transformers, retrievable at a branded micro-site. Agency: Oasis, Seattle.