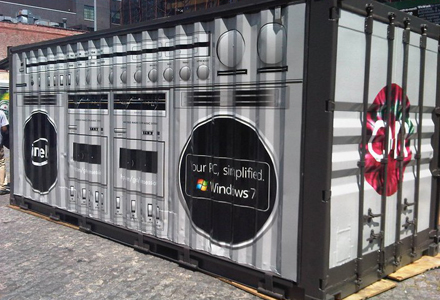 HP this summer deployed a series of shipping containers retrofit to look like giant boomboxes to promote its HP Jam Sessions program, a buzz-building initiative designed to create excitement and awareness for the brand’s new Beats Edition laptops. The laptop is designed to target the youth market with its focus on music and high-quality sound. The activations, which were part of a seven-week media campaign that visited six locations and four cities, began on August 3 at Lennox Square Mall in Atlanta, and included stops at the Navy Pier and Wrigley Field in Chicago, Penn’s Landing in Philadelphia and Gansevoort Plaza and South Street Seaport in New York City.

In each location, the brand planted a shipping container wrapped to look like a boom box for two days before the launch to inspire curiosity and drive foot traffic. On launch day, the container unfolded to reveal a pop-up techno-mecca of laptop demo stations, PC gaming from EA, music-themed green-screen photo activations and a interactive, multi-touch digital graffiti wall. And the whole time, internationally recognized djs were spinning tunes from the Beats laptops to keep the crowd hyped up and passersby from passing by. As people came in, HP gave each of them a “backstage pass” with a call to action to visit local retailers. The guests created custom screen-printed t-shirts before taking a turn using virtual stencils, stamps and spray paint to create graffiti masterpieces using the interactive multi-touch wall. All told, about 75,000 fans hit the Jam sessions, downloaded about 5,000 green screen photos from the microsite and visited the event’s Facebook page and website about 65,000 times. Check out the video.

“We’ve been targeting a younger audience with the Beats audio laptop line,” Michele Kennedy, consumer advertising manager at HP, told Buzz. “And we’ve found that the Beats audio story can only be truly understood if they experience it. That way, it’s not just us trying to tell the story. They experience it.” Agencies: Omnicom and City Eventions, both of New York City.